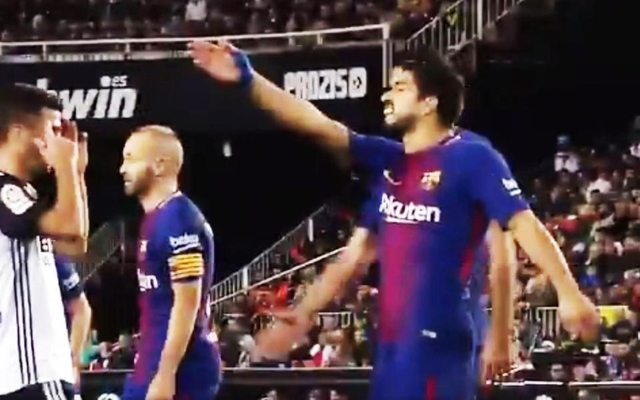 It’s fair to say that the Barcelona players weren’t impressed with the officials during their draw with Valencia at the weekend, and rightly so.

Although they were able to maintain their four-point lead over their nearest La Liga rivals, it could have perhaps been more had Lionel Messi been correctly awarded a goal.

Replays showed that the ball has crossed the line by some margin before Valencia goalkeeper Neto scrambled it away after initially spilling Messi’s shot, but with no VAR technology, it was left to referee Ignacio Iglesias and his assistants to make a decision.

Unfortunately for Barcelona, they judged it not to have crossed the line, sparking angry reactions from players and supporters who were denied a clear goal.

As reported by AS, Luis Suarez was amongst those who were far from impressed with the decision, as he launched a tirade at the linesman, with the report claiming that he said: “You are a (s***ter), dwarf s***.”

The video below claims to back that up and so it remains to be seen whether or not the Uruguayan lands himself in hot water. However, given the circumstances, Barcelona had every right to feel aggrieved and they’ll hope that it doesn’t come back to haunt them later in the season.

Parejo (kapten Valencia): “Messi’s goal was clear. It was a clear goal, truth has to be told. Referees make mistakes.” pic.twitter.com/NvV0hlaJJi

What needs to happen for Barcelona to earn a fee for Luis Suarez after Atletico Madrid transfer September 22, 2020 21:55
FC Barcelona