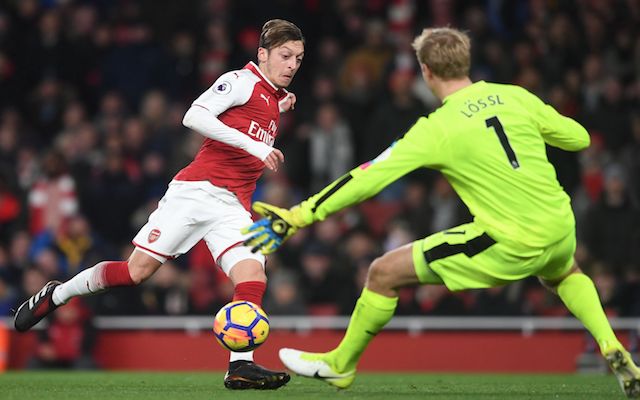 The three points never looked in doubt for the Gunners tonight with a near perfect performance securing Arsene Wenger’s side a convincing win.

Lacazette set the pace early on for the Gunners scoring just three minutes into the action. At half-time Lacazette was replaced by his fellow French international Olivier Giroud.

Giroud was able to register two goals for himself in the second half and impressed massively after a more than disappointing performance in mid-week against Colgone. Giroud was criticised during the mentioned Europa League clash after failing to score against the German side that boast the worst defensive record in the Bundesliga this season. However, the Frenchman silenced his critics at the Emirates tonight with an impressive brace.

So often Mesut Ozil is used as the scapegoat by Arsenal fans to explain their shortcomings. However, when the German is at his best he is simply unplayable.

Arsenal’s star was outstanding during the Gunners’ recent 2-0 victory against North London rivals Tottenham last week and it appears that Ozil has carried on his fine form.

The German drifted between the attacking lines tonight and created chances throughout before adding his own goal on the 72nd minute.

The Australian Aaron Mooy has been one of the stars this season for newly promoted Huddersfield and was surely excited to get his opportunity to play at one of the biggest clubs in England tonight.

However, the midfielder was disappointing to say the least. The Australian simply couldn’t cope with the movement of Ramsey and Ozil in the centre of the park and even saw a yellow card next to his name before being subbed off with 20 minuted remaining.

3:58 – There were just 3 minutes and 58 seconds between Arsenal’s second and fourth goals against Huddersfield. Floodgates.

Arsenal fans were of-course ecstatic and there was plenty of love for Mesut Ozil.

Jose Mourinho must be watching Arsenal score 5 goals past Huddersfield and wondering how we make it look so easy ??

If Ozil leaves Arsenal he’d 100% be a bigger loss than if Alexis leaves.