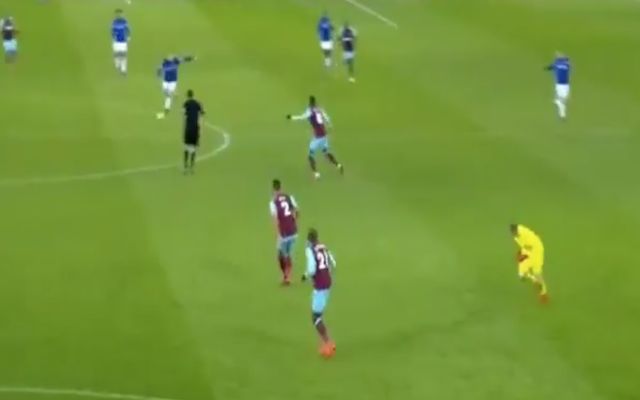 Wayne Rooney completed a perfect hat-trick for Everton against West Ham tonight with the former England captain scoring from inside his own half.

It was a horrid night for West Ham at Goodison Park and Rooney put his former Everton and Manchester United boss David Moyes to the sword as he captained the Toffees to a convincing three points.

Rooney’s first of the night came from the penalty spot with the star needing two attempts after West Ham goalkeeper Joe Hart parried his initial penalty back into the path of Rooney who nodded home the rebound.

The pick of the bunch however was of-course the third in which Rooney drilled a shot from over 50-yeards into the West Ham goal without even breaking his stride as he stroked the ball across the Goodison Park pitch.

Joe Hart was left stranded outside his own box after misjudging a clearance in a similar fashion to when Zlatan Ibrahimovic caught the England goalkeeper off his line with a sensational and infamous bicycle kick many years ago.

You can watch Rooney’s outstanding third goal from tonight below.

Not bad for a man past his best…

Wayne, Rooney still got it pic.twitter.com/4lYJulONxM