Arsenal take on Manchester United in the Premier League this weekend, with Arsene Wenger and Jose Mourinho set to renew their rivalry in the stand-out tie on Saturday.

Despite very mixed fortunes earlier in the season, United are now just four points ahead of the Gunners as they travel to the Emirates Stadium with a poor recent away record against the top six sides.

Still, Mourinho’s side certainly look the stronger on paper, and the more likely to go the distance in challenging Manchester City for the title this term, even if they don’t continue their historic dominance over Arsenal.

With so many big names in their ranks, it’s little surprise to see them edge out our combined XI with Arsenal…

GK: No contest in goal, with United’s David de Gea getting the nod. As much as Arsenal’s Petr Cech may be a Premier League legend, he has not been at his peak since his Chelsea days and has been unconvincing of late.

CB: On current form, we’ve gone for the immense Shkodran Mustafi over his Arsenal team-mate Laurent Koscielny as one of the two centre-backs. If he carries on like this, the German will go down as one of the most improved players in the league this season.

CB: Alongside Mustafi, we’ve gone for the rock-solid Phil Jones at the back after his improvement for United under Mourinho.

RB: A close call here given Antonio Valencia’s superb transition to right-back, but Hector Bellerin is a true specialist in his position and one of the best in Europe on his day.

LB: One of the signings of the summer, Sead Kolasinac has been a great addition to this Arsenal squad and is the kind of specialist left-back Mourinho must wish he had as he freezes out Luke Shaw and relies on a surprise renaissance from Ashley Young in that role.

CM: A far stronger area for United than for Arsenal, we’ve gone for two Red Devils stars here, the first being Nemanja Matic in the more defensive role – a clearly superior player to either Francis Coquelin or Granit Xhaka.

CM: Secondly, no surprises here as Matic is partnered by the excellent Paul Pogba, who is going from strength to strength for United this season, and who is clearly a cut above Aaron Ramsey.

RW: Just getting back into form, Alexis Sanchez takes a place on the right ahead of slightly unconvincing United attacking midfielders like Juan Mata and Henrikh Mkhitaryan.

LW: Anthony Martial is one of the most exciting young attackers in the country at the moment, looking hugely improved as he works his way into Mourinho’s plans this season.

AM: Could be on his way to United in the near future? For the time being Mesut Ozil takes a place in the number ten role here and will be a key player for Arsenal against the Reds this weekend.

CF: Finally, it’s Romelu Lukaku getting the nod up front despite his recent dip. Alexandre Lacazette is expected to miss this weekend’s game and is not quite that same calibre of player as the Belgian when he’s really on form. 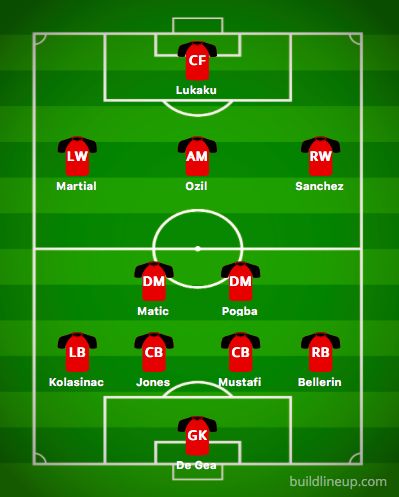