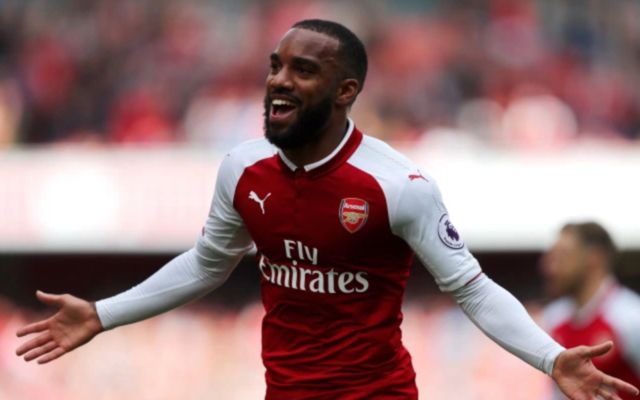 Arsenal face Man Utd on Saturday evening, and it’s fair to say that the Gunners faithful are absolutely delighted that Alexandre Lacazette is starting.

It comes despite the fact that Arsene Wenger suggested in midweek that the French international could be ‘out for a while’, as per BBC Sport, after he sustained a groin injury in the win over Huddersfield Town.

Lacazette had to be replaced at half-time, and so naturally there were fears that the problem was serious and that would have been a major blow for Arsenal heading into a busy festive schedule.

However, Wenger instead surprised us all with the inclusion of his marquee summer signing in the starting line-up on Saturday, with the 26-year-old now hoping to add to his tally of seven goals in 14 Premier League games.

Judging from the reaction below, it’s pretty obvious that Arsenal fans are overjoyed that he will face United, and they specifically praised Wenger for what they perceived as mind games by suggesting that their top scorer would be out of the huge showdown.

In turn, Jose Mourinho will now potentially have to adjust his plans slightly, as United will surely have their hands full with Arsenal’s preferred attacking trident of Alexis Sanchez, Mesut Ozil and Lacazette linking up once again.

WENGER, THE KING OF MIND GAMES

Arsene was playing mindgames with Mourinho saying that Lacazette was out ?

when Wenger said that Lacazette would be out: pic.twitter.com/HuV2w09ylA

wenger does a mourinho on mourinho ? pic.twitter.com/v0mFUnVcKt