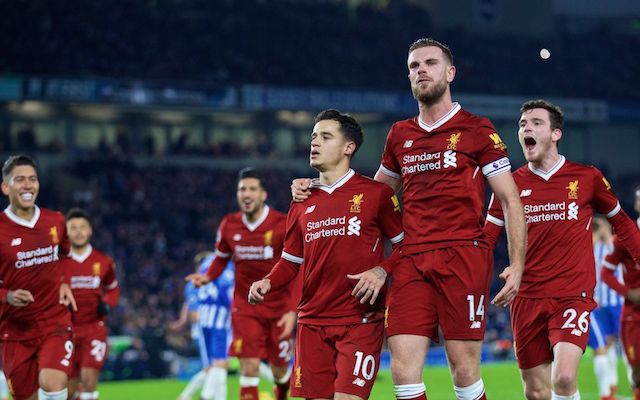 Liverpool ran riot over Brighton with Philippe Coutinho stealing the show after a superb individual performance.

The Reds jumped into the top four with Tottenham dropping points away to Watford.

Emre Can gave Liverpool the lead on the 30th minute at the Amex stadium after great work from Coutinho. Just 60 seconds later Roberto Firmino added a second for Liverpool before the Brazilian striker sealed his brace three minutes after half-time.

While the scoreline tells the story of a comfortable day on the South coast for Liverpool, but it was not completely straight forward.

Glenn Murray converted a penalty for Brighton on the 51st minute and for a while Brighton pressed and came close to reducing the deficit to just one.

However, Liverpool’s attacking prowess proved too much for the newly promoted side and their unbelievable pace on the counter was the difference.

Coutinho sealed a magnificent goal from a free-kick on the 87th minute and just two minutes later the playmaker had a shot deflected off of Lewis Dunk as the game finished 5-1.

At his best the Brazilian is simply unplayable and today Philippe Coutinho was head and shoulders above the rest.

The Liverpool number ten orchestrated almost every attack the Reds produced and was a threat not only during attacks but also in starting counters from the Reds’ own half.

The star of the show deservedly sealed a goal for himself with three minutes remaining after a clever free-kick on the 87th minute.

Lewis Dunk struggled to cope with the movement and pace of the Liverpool attack all afternoon and his day fell to even further disappointment after he deflected a Coutinho shot into his own net with just a minute remaining on the clock.

It was perhaps more of a nod to the quality of the Liverpool attack rather than Dunk’s weak performance that he has been named our flop of the match but the star and his defensive teammates will need to improve substantially if they are to compete with some of the best attackers in world football this season.

The Reds love an away day…

57 – The Amex Stadium will be the 57th ground that Liverpool have played at in the Premier League; they’ve won at 52 of the previous 56, more than any other team. Guests.

Liverpool fans were understandably ecstatic to jump into the top four and were full of praise for Coutinho.

Man, we should savour every moment of watching Philippe Coutinho play for Liverpool. Some of those turns in the first half were delightful.

In his last 10 games for Liverpool Coutinho has been involved in 13 goals,