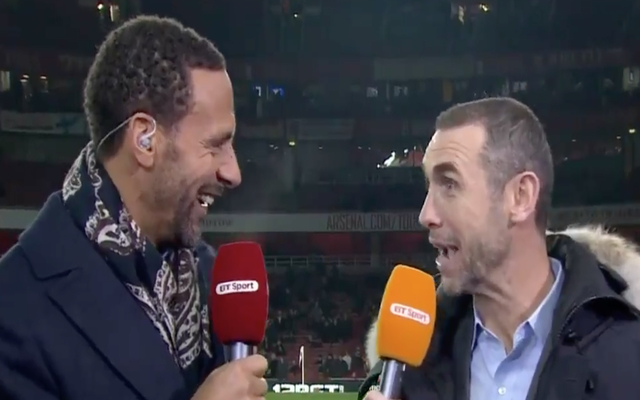 There was an uneasy moment prior to kick-off of Arsenal against Manchester United on Saturday evening with Rio Ferdinand and Martin Keown taking a trip down memory lane.

While the pair remembered some of the heated battles between the two sides over the years, things got a little testy when Keown was discussing the incident at Old Trafford in 2003.

It involved the infamous clash between Ruud van Nistelrooy and the Arsenal players after his missed penalty, and while Keown wanted to see the funnier side of it in the end, Ferdinand labelled it “bang out of order”.

Ultimately, the pair ended with a smirk at each other but host Jake Humphreys sounded a little uncomfortable as he switched his questions to Frank Lampard who was stood to the side listening intently as the two rivals got things off to a fiery start.

Some may argue that Arsenal vs Man Utd isn’t as big as it used to be, and they may well have a point given that the two giants of English football have struggled for the major trophies in recent years.

However, it still represents a lot to the former players, and it should do for the current group too along with Arsene Wenger and Jose Mourinho who will undoubtedly be desperate to claim all three points on Saturday.

.@rioferdy5: “You were bang out of order”@martinkeown5: “It was just passion”

Rio and Keown reminisce on THAT incident in 2003… ? pic.twitter.com/8i0Koxl5Tq