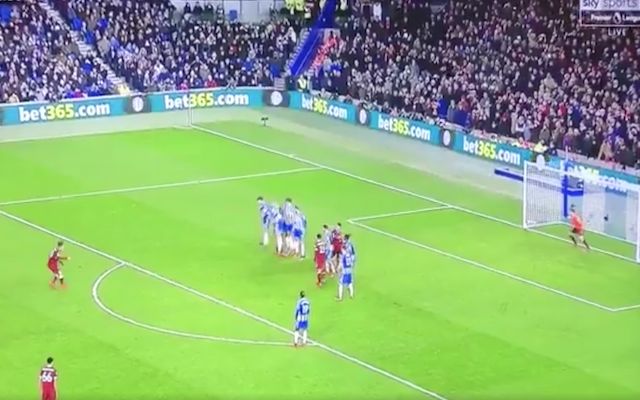 Philippe Coutinho starred in an outstanding Liverpool display as the Brazilian sealed a neat goal to propel to Reds into the top four.

Emre Can gave Liverpool the lead before a Roberto Fimino brace either side of half-time gave the Reds a 3-0 lead.

Brighton managed to pull one back thanks to a Glenn Murray penalty and worried Liverpool for periods in the second-half but Coutinho sealed the three points with minutes reaming.

Liverpool found themselves with a free-kick on the edge of the box with five minutes of time to play. Coutinho was stood over the ball and there looked to be no competition over who would be taking it. The Brazilian executed the set-play to perfection with an incredibly intelligent effort.

Anticipating the wall to jump the Liverpool playmaker slid the ball under the Brighton wall rather than over it and reeled away in celebration before the ball had even hit the back of the net.

The goal capped off a superb performance for the magician who created chances throughout. His turn of pace and vision was simply too much for the Brighton defense to cope with from start to finish.

Watch below the clever moment that the star scored from a free-kick.