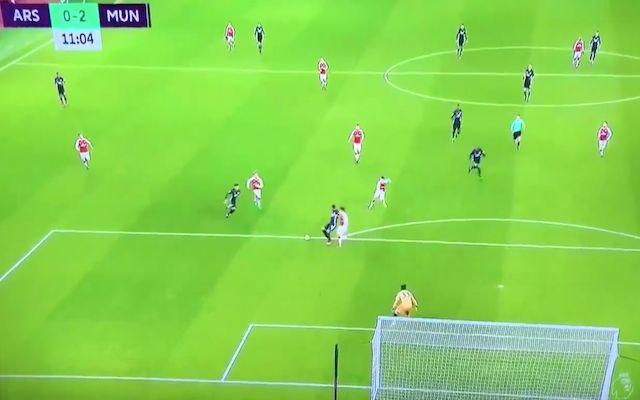 Anthony Martial assisted Manchester United’s second goal against Arsenal with a sublime piece of skill as the Gunners fell 2-0 behind in ten minutes.

The Frenchman collected the ball just inside of Arsenal’s box before producing a mesmerising turn to set Jesse Lingered through one on one with Petr Cech as the Englishman slotted past the Arsenal goalkeeper to put United two goals ahead within eleven minutes.

Arsenal appeared to be stunned by United in the opening ten minutes after Antonio Valencia had already cleverly combined with Paul Pogba on the fourth minute to give United the lead.

Martial has been on the receiving end of a flurry of praise recently after some sublime performances and was today rewarded with a start alongside Romelu Lukaku.

This statistic below surfaced this week which lead to many United fans calling for Martial to start vs Arsenal today.

Anthony Martial has contributed a goal or assist every 63.8 mins this season – a better ratio than Agüero, Sané and Salah. ??? pic.twitter.com/JvKdSqeMXZ