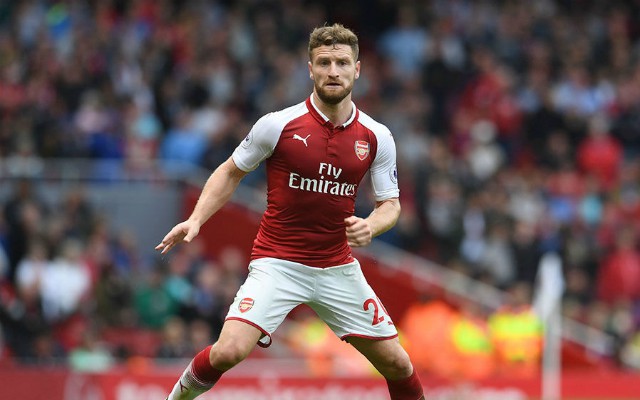 In truth, it could have been anyone in the Arsenal defence, but Gunners fans picked on Shkodran Mustafi in particular in the first half against Man Utd.

The Gunners fell 2-0 behind against the Red Devils after 11 minutes, with Antonio Valencia and Jesse Lingard giving the visitors a commanding lead.

However, while there were bits of magic from United in the build-up to those goals, they certainly got a helping hand from the Arsenal defence who were desperately poor in possession.

Never more so in the lead up to the second goal, as Mustafi took too long on the ball before being dispossessed, with Anthony Martial producing a brilliant assist to set Lingard through to finish.

The German international’s night got even worse as he was forced to limp off immediately after the ball hit the back of the net, and it’s fair to say that Arsenal fans weren’t impressed.

Many accused him of feigning injury having been tormented in the opening minutes of the game, but it’s evidently not going to be the reasoning for him being replaced.

Nevertheless, he won’t be happy with his own display, and he’ll certainly have to do much better when he returns having been in impressive form prior to Saturday night.

As a whole, Arsenal gave themselves plenty to do to launch a comeback, but Mustafi will be left to rue a very disappointing outing and some abuse to go with it…

Aaaaah there he is the Mustafi I know back again

What a great game you had, Mustafi #AFCMUN

Mustafi going off with what looks like a broken spirit.

Mustafi’s had 12 minutes of Martial, Lukaku and Lingard and thought fuck that.

Mustafi was so ashamed of his mistake that he really faked an injury because he knew he couldn’t handle the pressure.

Two massive errors from Koscielny and Mustafi have cost us. Don’t blame Wenger for this. Blame the players for not concentrating.

I’ll never forgive Mustafi for giving away a goal to Jesse fucking Lingard.