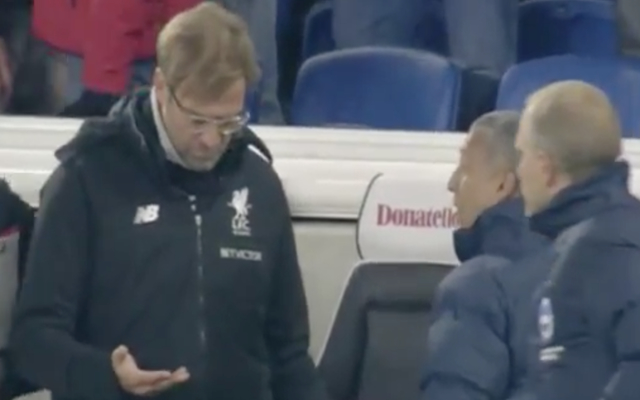 After Liverpool’s impressive 5-1 win over Brighton on Saturday, Jurgen Klopp’s unpleasant-looking exchange with opposite number Chris Hughton was a talking point.

As seen in the tweets below, supporters were left confused over what it was about as while the pair did shake hands, Hughton was evidently irked by something and let Klopp know how he felt.

Speaking on Match of the Day, Ian Wright insisted that he knows what the problem was, as he believes that managers are growing agitated over the way in which Klopp celebrates.

With his side really turning on the style in the heavy win over Brighton, perhaps his celebrations were particularly unwelcome, but it seems a little harsh to criticise a manager for enjoying his side winning games.

“The thing with Herr Klopp when you score four or five and the fist-pumping and the gurning kind of gets to you,” he said on MOTD, as reported by The Express.

“I’m sure there are other managers who feel the same way about him. He’s doing people’s heads in.”

In his defence, Wright wasn’t just attacking Liverpool for the sake of it as he was full of compliments for the team and the way in which they played against Brighton.

That starts with the way in which Klopp sets his team up, and so it clearly isn’t just an unprovoked and unnecessary attack on the German tactician.

However, it does raise a talking point as to whether the Liverpool boss does take it too far. On one hand it’s simply just celebrating his team’s success and being almost like a fan, on the other, a certain degree of class is needed to avoid these situations from arising as Klopp also annoyed the Sevilla coaching staff earlier this season which led to them refusing to shake his hand after their Champions League meeting.

What’s your take? Does Klopp take it too far or are Wright and Hughton overreacting?

What was wrong there? Chris Hughton refused to shake Klopp’s hand. Did I miss anything?

Looked liked Hughton had a little argument with Klopp at the end of the game, I wonder what that was all about?

What was Houghton’s problem with Klopp?!

Hughton not happy with #Klopp