It’s Monday and after a thrilling weekend of Premier League football that means BBC pundit Garth Crooks is back with his team of the week.

Unsurprisingly, it’s a line-up dominated by Man Utd players after their 3-1 win in a pulsating encounter at the Emirates against Arsenal on Saturday.

David De Gea produced countless world-class saves and equalled a Premier League record with 14 saves in a single game and so rightly gets the nod between the posts, while goalscorer Antonio Valencia is in at right back.

Nemanja Matic recovered from an injury scare to feature and didn’t disappoint as he was a key figure in midfield for the Red Devils, while there had to be a place for Jesse Lingard after his brace was pivotal in downing the Gunners.

Question marks could be raised about his celebrations, but as for his impact on the game, it’s a fair argument to suggest that he deserves a place in the team of the week as he was crucial on and off the ball for Jose Mourinho’s men at the weekend with his energy, determination, movement and clinical finishing.

Andreas Christensen continues to impress in the heart of the Chelsea defence having displaced David Luiz in Antonio Conte’s line-up, while Victor Moses join his teammate in the XI, oddly at left-back though as Crooks has done this previously to try and fit in star performers.

Ashley Williams completes the back four after he was influential in Everton’s win over Huddersfield as they look to pick up some form and climb the table.

David Silva and Philippe Coutinho join Matic in a midfield three, with the latter in particular producing a stand-out display in Liverpool’s big win at Brighton.

The Brazilian playmaker scored a wonderful free-kick to round off an impressive performance, and Reds fans will undoubtedly be delighted with what they’re seeing from him this season.

Eden Hazard is going through the gears and reaching top form for Chelsea and after bagging a double in the win over Newcastle, he’s up top with Roberto Firmino and Lingard.

The Belgian international now has eight goals and six assists 19 appearances so far this season, and he’ll be delighted with his recent displays as Chelsea continue to chase down the two Manchester clubs at the top of the Premier League table in a bid to defend their crown. 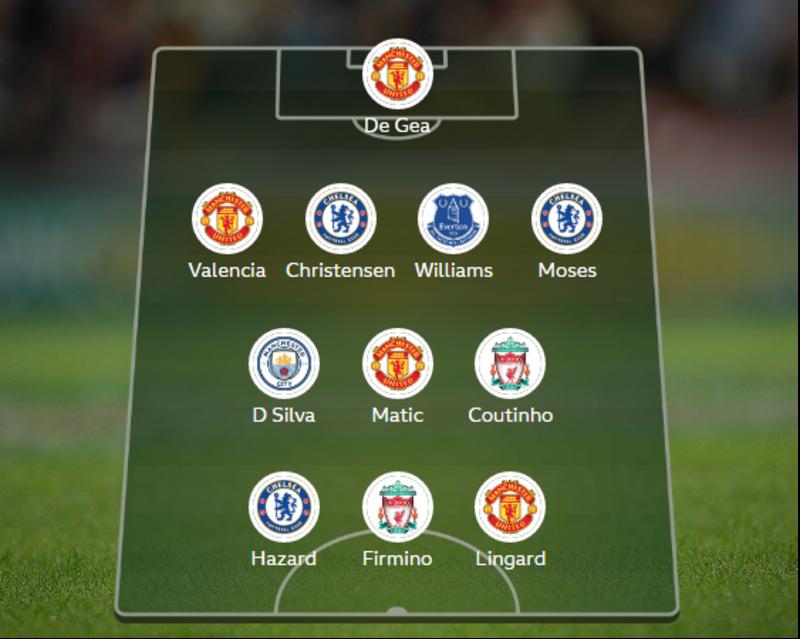