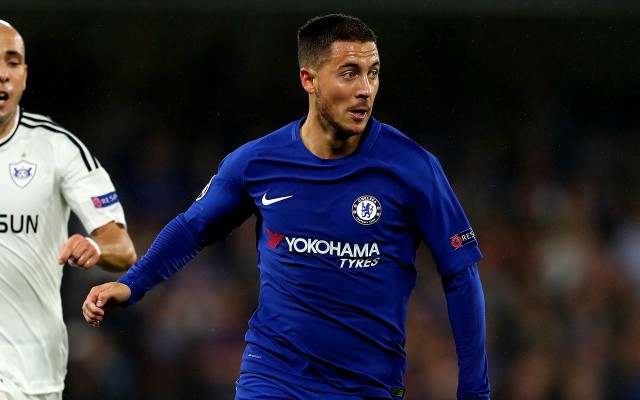 Chelsea will undoubtedly be growing concerned as reports claim that Eden Hazard is holding off signing a new contract with Real Madrid in mind.

The 26-year-old is starting to go through the gears this season as he continues to establish himself as one of the top players in Europe, scoring eight goals and providing six assists in 19 appearances in all competitions so far.

In turn, as he continues to show how important he is to Antonio Conte’s side, the last thing that Chelsea want is to be concerned with exit talk, but that’s unfortunately what they’ve got on their hands.

According to The Times, Hazard is ‘refusing to sign’ a new deal with Chelsea, and even more worryingly, it’s suggested that the reasoning behind that is because he’s eager to wait for an offer from Real Madrid.

It’s claimed that Chelsea put a new contract offer worth £300,000-a-week on the table in September, but that hasn’t yet been agreed upon by both parties even though it would make Hazard the highest earner in the history of the club.

On one hand, it’s a real source of disappointment from a Blues perspective, as they’ve helped develop the Belgian international into the player he is today, and especially given he’s only going to improve further and get even better, they’ll be desperate for an agreement from both sides.

Given their struggles so far this season, Real Madrid could be plotting big changes of their own next year, and so perhaps that is why Hazard is stalling, as he could be part of a very ambitious rebuild at the Bernabeu.

Zinedine Zidane, who is said to be an admirer of Hazard, as per the report, has seen Gareth Bale blighted by injuries while Karim Benzema and Cristiano Ronaldo have struggled for form and are entering the latter stages of their careers.

In turn, freshening things up with someone like Hazard would make perfect sense, but time will tell if they’re able to prise him away from Stamford Bridge. It could be argued that the Belgian ace will want to prioritise major trophies over money at this stage of his career, and he arguably has a better chance of that at Madrid given their trophy haul in the last four years with three Champions League titles.