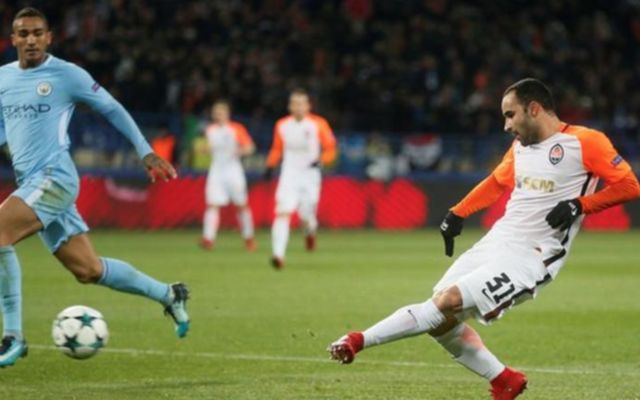 Man City’s 20-game winning streak came to an end tonight at the hands of Ukrainian side Shakhtar Donestk, with the home side beating the Citizens 2-1 at the Donbass Arena.

The home side opened the scoring through a very accurately placed finish from Bernard, which had Ederson beaten from the moment it left the midfielder’s foot.

Shakhtar then doubled their lead six minutes later, as a mistake from Ederson allowed Ismaily an open goal to tap the ball into.

Pep Guardiola’s side clawed a goal back two minutes before time, as Sergio Aguero hammered a penalty home to give the away side a slim hope of snatching a draw.

Left-back Ismaily was exceptional tonight, as the Brazilian international scored the decisive goal that ended up winning his side the match.

The 27-year-old was on form tonight, as Ismaily was a constant threat down Shakthar’s left hand side, with the player deservedly grabbing a goal for his troubles as well.

This tweet shows how good the Brazilian was this evening

Ismaily was great fun to watch. Shame he’s gone off

Man City’s ‘keeper Ederson had a fairly poor game tonight, with the former Benfica shot-stopper being at fault for Shakthar’s second goal.

Despite making four saves on the night, Man City fans will feel Ederson could’ve done a lot better for Ismaily’s goal, with the Brazilian far too slow off his line to clear the ball.

This tweet sums up the goalkeeper’s performances these past few weeks, and especially tonight

Ederson has really got to step up if City want to win the Premier League. Been all over the place recently. Hoping United can punish him this Sunday.

This from Opta shows just how efficient in defence City have been lately, even if they didn’t showcase that tonight!

2 – Manchester City have conceded more than once in the first half of a game for the first time since April (v Chelsea in the Premier League). Breached.

This fan was all praise for City’s youngsters tonight

Poor performance overall but @Brahim looked class when he came on. Hard for Foden playing out of position but didn’t do much wrong. #TheFuturesBright #mancity #ucl

Thought we did ok, some good chances created but poor in front of goal – looking forward to Sunday now ?? #ManCity

Man City lose against a poor Shakhtar side tonight 2-1 hahaha hopefully the same happens this Sunday.

And finally, this fan was very critic of Man City’s defence tonight, and rightly so!

Man City's defence tonight is embarrassingly bad, yeah they've won the group but this is awful. Yaya walking around like he doesn't care, Mangala so poor #MCFC