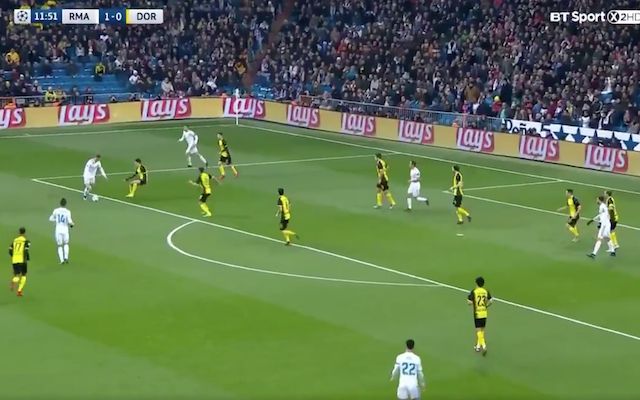 Cristiano Ronaldo became the first ever player to score in every Champions League group game during an individual campaign during Real Madrid’s victory tonight.

The Portuguese star has registered at least one goal in every single one of Real Madrid’s six Champions League games this season allowing the attacker to set an astonishing new record.

Madrid hosted German side Borussia Dortmund tonight who had nothing to play for having already lost out on the chance to qualify for the knockout stages of the Champions League.

The night however was far tricker than anticipated for Real who narrowly scraped through with a 3-2 win after being pulled back by Dortmund to 2-2 after being 2-0 ahead.

Ronaldo’s historic goal came on the 12th minute. The Portuguese star collected the ball on the edge of the box surrounded by yellow Dortmund shirts.

He took one touch to shift the ball onto his right foot before curling a superb effort past the Dortmund goalkeeper and into the top right corner.

Watch the historic goal below…