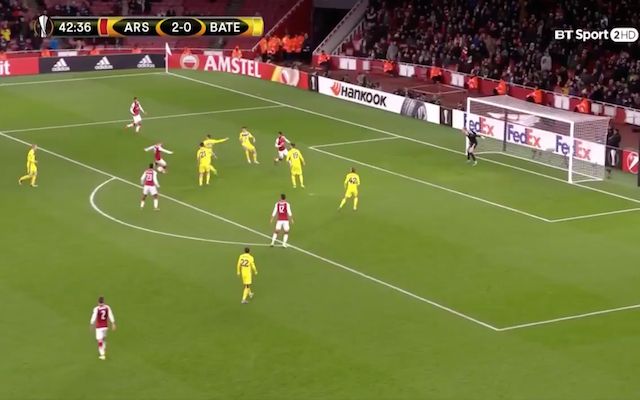 Jack Wilshere scored his first goal in three years with a superb strike for Arsenal in the Europa League.

The Gunners ran riot as they beat Bate Borisov 6-0 at the Emirates. Theo Walcott and Olivier Giroud were also amongst the goals with the stars looking to impress Arsene Wenger.

Wilshere however was the star of the show. The Englishman not only found himself on the scoresheet but also created chances throughout.

The Englishman drifted from wide positions to central positions throughout the 90 minutes with his movement far too much for the opposition to cope with.

Wilshere’s goal on the 43rd minute was a beautiful strike to break his three year duck for the Gunners. The number ten collected the ball on the edge of the box before firing in a superb effort with his left-foot.

It now casts the question as to whether the star deserves a place back in the England squad ahead of next year’s World Cup.

You can watch the superb Wilshere strike below…

Ice cool in front of goal ??

It’s been a while but Jack Wilshere is back amongst the goals with an absolute cracker! ? pic.twitter.com/bLABemz3qM