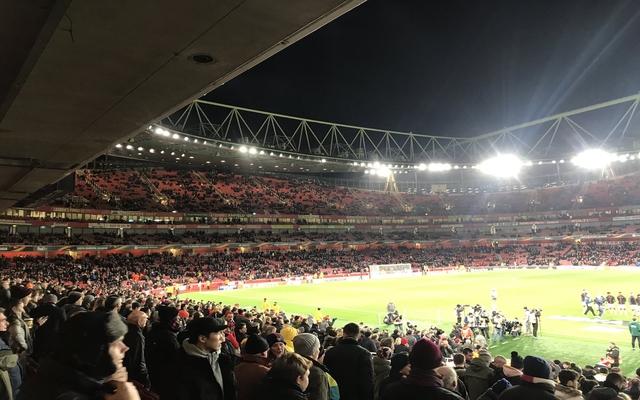 Top spot in Group H in the Europa League may well have already been secured, but Arsenal would surely have hoped for a better turn-out against BATE Borisov.

As seen in the images below from reporter James Olley, the Emirates looked far from packed on Thursday night, with supporters not turning up despite claims from the club that they had sold out.

With nothing to really play for and the game not meaning much, it’s easy to understand why fans didn’t show up, but they certainly missed a treat as the Gunners ran riot in a 6-0 win, and so the disappointment of it being so empty will still be felt.

As per The Sun, 50,000 tickets were sold for the game, but judging on the evidence of last night coupled with emails that were sent out just days before the game reminding supporters tickets were still available, it doesn’t seem as though many fancied braving a cold London night and a less than attractive game itself with many arguably counting the costs ahead of Christmas.

Naturally, Twitter users didn’t miss the opportunity to comment, whether they were of an Arsenal persuasion or not, as it certainly didn’t go down too well with the north London giants undoubtedly hoping for better turn-outs in the knockout stage of the tournament.

With top teams dropping down from the Champions League and with the likes of AC Milan floating around from the group stage, Arsenal could have a pretty complicated path to the final if they take the competition seriously.

Given it’s another path to the Champions League, they’ll be hoping supporters are in attendance to cheer them on to a deep run, although a top four finish in the Premier League will also be the minimum expectation.

Can understand why but Emirates Stadium is looking very sparse as the teams come out here. Know it’s tickets sold etc but actual attendance is going to be very low. pic.twitter.com/Vx2DVBBITz

Arsenal fans out in force Ha

Let’s show them our love and support for the team! By not going to the game! #AFCvBATE #arsenal

Watching a bit of the Arsenal Europa League game. Emirates is empty! Is it because of ticket prices, weather warnings or apathy?

Had the Emirates ever been this empty for a supposedly first team match before?