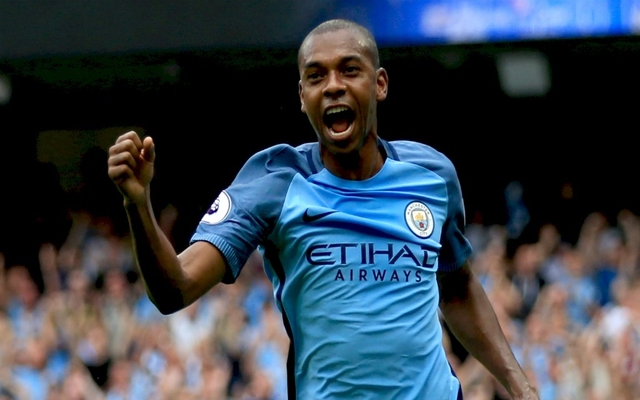 Man City midfielder Fernandinho would arguably have been looking forward to his tussle with Man Utd’s Paul Pogba this weekend, but he’s been denied the opportunity.

The Frenchman received a straight red card against Arsenal last weekend, resulting in a three-game suspension which will see him miss the highly-anticipated Manchester derby this weekend.

With United eight points adrift of their rivals and desperately trying to claw their way back to keep pushing for the Premier League title, losing Pogba for such an important game is going to be a huge blow for Jose Mourinho and his side.

That’s exactly what Fernandinho thinks, as he’ll look to help win the midfield battle for his side on Sunday at Old Trafford, with the 32-year-old stalwart making 21 appearances in all competitions so far this season having established himself as a key figure in Pep Guardiola’s plans.

“Of course, any team that loses such a good player, they are going to miss him,” he is quoted as saying by Sky Sports.

“But Manchester United have good players and it doesn’t matter who is going to play in his position, they will do a good job. It will be a tough game for both teams.”

It’s difficult to disagree with the Brazilian’s overall assessment, such is the strength in depth and quality that United possess, and they’ll certainly still pose a threat even without him with Nemanja Matic likely to be paired with either Ander Herrera or Marouane Fellaini.

However, as seen during his spell on the sidelines with a hamstring injury earlier this season, United don’t have a direct replacement that can offer the power, flair and creative quality that Pogba possesses, and so it’s a huge bonus for City that he’s out.