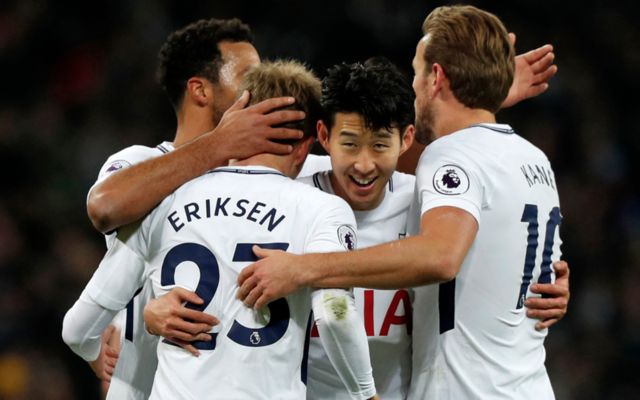 Spurs hammered Stoke 5-1 at Wembley today, as Mauricio Pochettino’s side went within a point of Liverpool in the race for Champions League qualification.

Spurs opened the scoring through a Ryan Shawcross own goal, with Heung Min-Son then doubling the home side’s lead just after half time.

Harry Kane then hit a second half brace, with goals from Christan Eriksen and Shawcross in the last 10 minutes leaving the final score at 5-1.

Son was absolutely superb for the north London side this afternoon, with the South Korean causing Stoke a whole host of problems down that right hand side.

The player bagged a goal and an assist, as his performance went a long way to helping his side hammered Stoke for a four successive game in a row.

Has to be Heung Min Son. Bossed the game. Best game I've seen him play for us since he joined.

Kevin Wimmer had a poor game against his former club today, with the player being run ragged by the Spurs attack constantly throughout the match.

Son had Wimmer running in circles today, as the Austrian’s performance is definitely going to be one that the defender is going to want to forget.

Stoke must hate playing Pochettino’s side at this point!

4 – @SpursOfficial have become the first side in English top-flight history to win four consecutive league games against a single opponent by at least four goals. Crushed.

This fan was all praise for Spurs’ performance today

This is the Tottenham Hotspur we know and love, fantastic to see Dele Alli so heavily involved for Sonny’s goal and Kane back scoring! #COYS#THFC

and thats why Ben Davies is in the team ahead of Danny Rose. Quality end product, always accurate and calculated. Quality! #COYS #THFC

Whilst this fan couldn’t help having a dig at Chelsea following the Blues’ loss earlier!