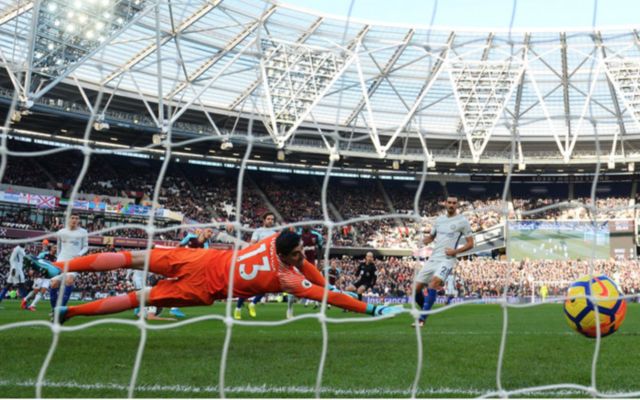 Chelsea lost their four league game of the season this afternoon, as a sixth minute strike from Marko Arnautovic saw Antonio Conte’s side loss further ground in the race for the Premier League title.

The Blues fell behind just six minutes after the game had started, as a ball from Manuel Lanzini put Arnautovic through on goal, with the former Stoke ace slotting to the ball past Thibaut Courtois to put his side 1-0 up.

Chelsea squandered a whole host of chances throughout the rest of the match, with the best falling to Spanish Alvaro Morata, who saw his 93rd minute volley fly just past the post as the Hammers held on for all three points.

Following this result, Chelsea now sit 11 points behind Premier League leaders Man City, with the Citizens also having a game in hand over the Blues, whose dream of retaining the Premier League title looks all but over.

West Ham’s Arthur Masuaku had an absolutely brilliant game today, with the defender doing his absolute best to stop nearly of Chelsea’s attacks down their left hand side.

The left-back was always on hand to deny Blues danger-man Eden Hazard, with Masuaku not allowing the Belgian a second of breathing time as his side held on to their slender lead to secure a win over their London rivals.

The player even broke a Premier League record as well, as the defender completed a total of 11 dribbles during the match, beating the previous record of 10.

Masuaku is looking like Roberto Carlos vs us today

Chelsea’s Spanish star Marcos Alonso had a shocker of a game today, with the left-back being run ragged by Michail Antonio and Lanzini down Chelsea’s left-hand side.

The player even got booked during the match, the only Chelsea played to do so, and was even subbed off by boss Conte in the 55th minute, summing up just how bad the Spanish international was today.

It just wasn’t Chelsea’s day today, and this from Opta summarises that perfectly

0 – Chelsea didn’t attempt a single shot on target in the second half against West Ham United, this despite having 71.8% of possession after the break. Frustrated. pic.twitter.com/tgQBptCSKw

Chelsea got absolutely slaughtered by fans following the result, with these tweets just a few of the many posted about the Blues’ performance

Rooney alone scored 3 goals against West Ham but Chelsea, with 11 grown ups on the pitch can’t score even a single goal.

A lot of people looking for Chelsea scapegoats today. If you’re being honest, this side has been poor 1 through 11. (Plus 12,13 and 14 in old money).

Feel so sad for Bakayoko. Man was enjoying his life in Monaco, but Chelsea decided to bring him to the EPL to expose him. Aquilani with dyed hair.