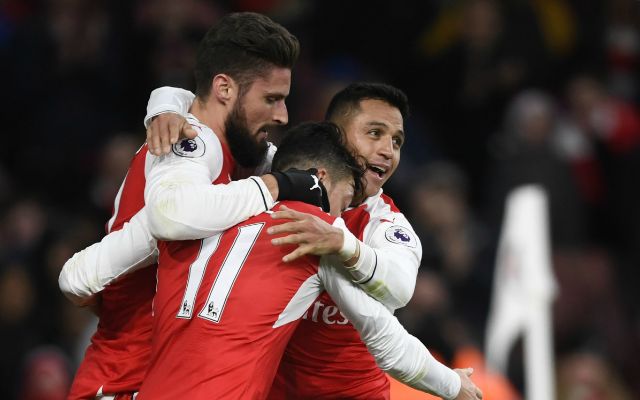 With the World Cup coming up next summer, Olivier Giroud’s lack of playing time for Arsenal in the Premier League isn’t going to do his chances of making the France squad any good.

The 31-year-old has played every minute in the group stage of the Europa League, while his overall tally reads six goals in 21 games in all competitions.

There’s no denying his importance to Arsenal as he offers something different with his physical presence and aerial prowess up front, but especially after the signing of compatriot Alexandre Lacazette in the summer, he has struggled to establish his position in the team with Arsene Wenger preferring to go with one up top.

In turn, all that has led to The Mirror reporting that Giroud could leave the Emirates on loan in January, as although a £40m move to Everton collapsed over the summer thanks to Wenger, his position hasn’t really changed as a move to either West Ham United or Crystal Palace has been touted.

Whether Arsenal are able to eventually get a similar offer is debatable, but with the World Cup in mind coupled with an understandable reported desire to stay in London for family reasons, Giroud may find himself plying his trade elsewhere in the New Year.

In contrast, it’s perhaps worth considering that with Alexis Sanchez and Mesut Ozil set to see their respective contracts expire at the end of the season, it could lead to him having more opportunities next season if he holds out.

That doesn’t help in the short-term though with Russia next summer in mind, and so would a short-term loan move away solve the problem with a return at the end of the season?

It’s a tricky position for Giroud to be in along with Wenger who could do with as much strength in depth as possible as they continue to push on in the Europa League, but it’s easy to understand why his fellow Frenchman would want to move.