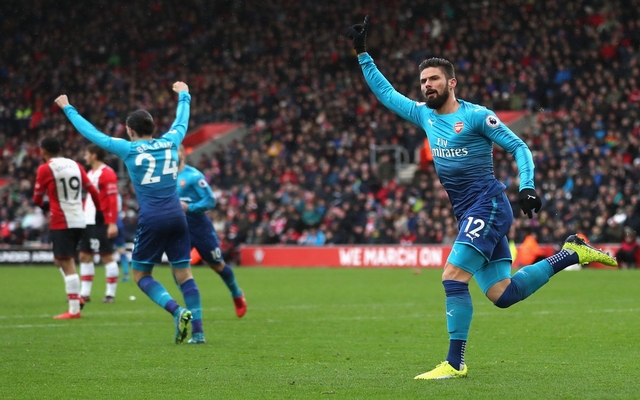 Arsenal striker Olivier Giroud came to the rescue for the Gunners on Sunday with a late equaliser in their 1-1 draw with Southampton at St. Mary’s.

Charlie Austin had given the home side an early lead, and while Arsene Wenger’s men toiled for large periods and looked vulnerable to the counter-attack, they eventually found a breakthrough to claim a point.

Giroud has struggled for playing time this season in the Premier League, although he’s managed seven goals in 22 appearances this year as he remains a key figure in the squad.

The Frenchman offers a different option up front with his physical presence and aerial threat, as seen with his goal against Southampton.

While he won’t be content with a role off the bench, he has certainly been decisive in it as he equalled former Manchester United striker Ole Gunnar Solskjaer’s record of 17 Premier League goals off the bench, the most of any player.

He’ll be desperate to force his way into the starting line-up sooner rather than later though with the World Cup fast approaching, and it seems the supporters are in agreement, as seen in the tweets below…

We’re not Barcelona. Stop it with the sideways and backwards passes. Change the formation to a 4-3-3 or 3-5-2 with Giroud and Lacazette up front

Most ever Premier League goals as a substitute: