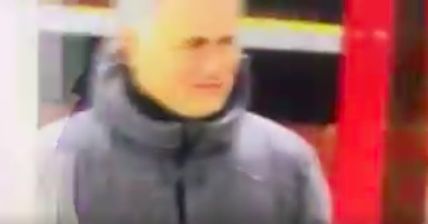 Manchester United manager Jose Mourinho looked on the verge of tears as Romelu Lukaku missed a glaring opportunity to draw his side level against Manchester City.

The Belgium international was presented with a glorious chance late in the game, only to allow Manchester City goalkeeper Ederson to get in the way of his shot and ensure Pep Guardiola’s men came away with three points.

This defeat looks a devastating blow to United’s title hopes, and the video below shows Lukaku really should have done better.

On top of that, it’s all too evident Mourinho can see Lukaku’s miss has cost his side big time, as he looks a broken man watching his side’s title hopes slip away for the season.

The Red Devils are now eleven points behind City, who have won a record 14 games in a row in a single Premier League season.

It would take a miracle for this immense-looking City side to mess things up from here, while United don’t exactly looked best-placed to punish them even if they did.