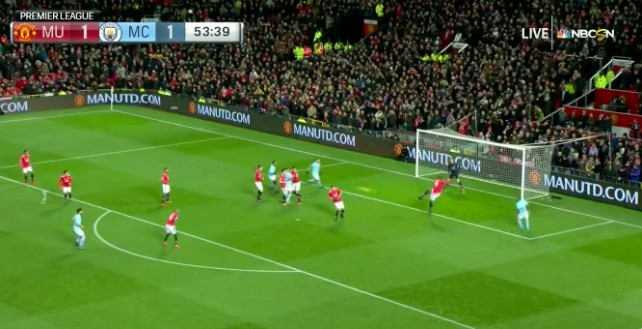 Manchester City fans are hailing Romelu Lukaku as their man of the match with two assists this afternoon in a nightmare defensive display by the Manchester United man.

The Belgian striker has messed up on both goals for City this evening, ducking out of the way of David Silva’s first-half strike, and then mis-hitting a clearance straight to Nicolas Otamendi for the second.

In between that, Marcus Rashford had levelled for the home side, but Lukaku’s two assists look like giving Pep Guardiola’s team the bragging rights in today’s derby.

There’s plenty of time for things to change, but the summer signing from Everton has certainly given his side a mountain to climb in one of their most important games of the season.

Given that Lukaku hasn’t exactly been banging them in at the right end lately, this is not the kind of performance he’ll have wanted at Old Trafford tonight.

City fans, and neutrals everywhere are loving it though…

Man of the match Lukaku keep up the good work…. lol#ManchesterDerby

Man Of The Match

Lukaku is man of the match with 2 assists so far. #ManchesterUnited #ManchesterCity

Lukaku man of the match ???

What a player lukaku has been for city today, two assists and still looking to set up another…. what a man

That’s two assists for Lukaku now, I can’t believe people say he doesn’t turn up in the big games