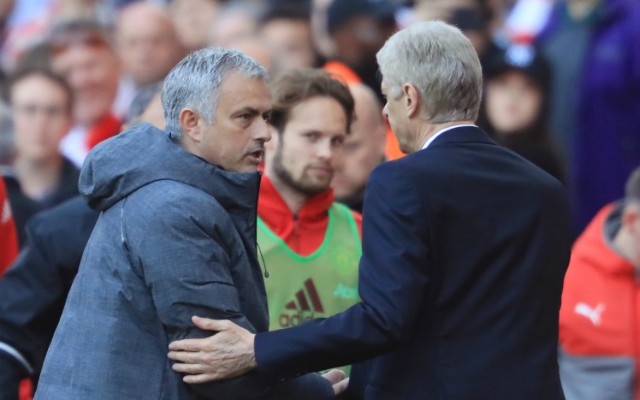 Arsenal boss Arsene Wenger has shown his support for Jose Mourinho following the heated clash that reportedly took place between Man Utd and Man City players at the weekend.

The Portuguese tactician was said to have been involved in the altercation too, as tempers seemingly flared following City’s 2-1 win over their rivals.

It was a highly-anticipated game with plenty at stake, as City took a huge step towards the Premier League title having now opened up an 11-point lead over their rivals.

However, it appears as though things boiled over after the game, with The Daily Mail reporting how a clash erupted between the two sides after the full-time whistle, with milk being thrown at Mourinho while others rushed to his defence.

“It can go overboard. It happened to us. Hopefully you commit 100 per cent to the pitch and are an angel after,” Wenger told the media, as reported by Sky Sports. “It is difficult to take to see the 100 per cent celebration on the other side. It is an experience that’s a little bit offensive.

“That’s why I admired sumo in Japan because the guy who wins does not show his happiness out his respect for his opponent. Is it something we can copy? I don’t think so. It’s not part of our culture.”

Wenger knows first-hand what it’s like to be involved or at least to have his own players involved in such a melee, as there was an infamous incident at Old Trafford when his Arsenal side were there over a decade ago.

However, in a season in which Liverpool boss Jurgen Klopp has also been criticised for being over-zealous with his celebrations, as seen with Brighton boss Chris Hughton’s reaction at full-time in their recent meeting, it seems some managers believe their rivals are over-stepping the mark too often now.

Every team, player and manager has a right to enjoy the moment and celebrate, but ultimately it sounds as though many believe that there is still a line you don’t go beyond, and it looks as though Wenger agrees with Mourinho that perhaps City went too far on this occasion from an outside perspective.