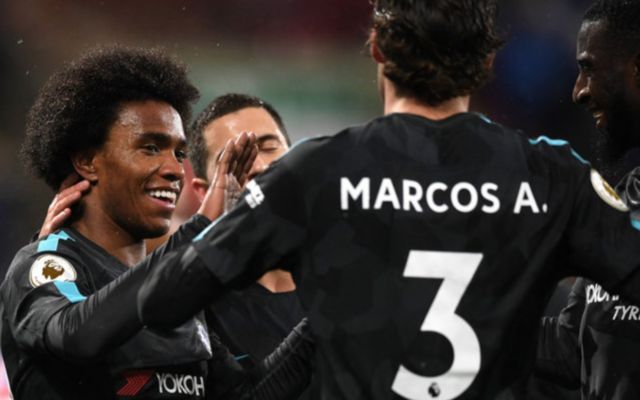 Chelsea beat Huddersfield 3-1 in the Premier League tonight, as the Blues went level on points with Man United in second place in the league table.

The Blues opened the scoring through French midfielder Tiemoue Bakayoko, after the youngster was put through by Brazilian Willian.

The away side then doubled their lead through goals from Willian and Pedro as Conte’s side built up an uncatchable lead.

The Terriers pulled one back through Laurent Depoitre, however it was only a consolation as the Blues went level with United in the league table.

Former Shakthar Donetsk forward Willian had a stormer of a game tonight, with the winger contributing to every one of the away side’s goal as they swept Huddersfield aside.

Here are a few select tweets about Willian’s performance tonight, and how fans were shocked with the player’s impressive display.

1 goal and 2 assists from Willian, absolutely class. I wish he played like this every game! pic.twitter.com/AqHGATg953

Willian was very good today though. Improved a little on his final third passes.

Bakayoko and Willian have scored, am I dreaming? It’s going to be a good night for Chelsea fans.

Sometimes, you just have to put your head down and work. Willian has been class the last few games but some are just too stubborn to admit it.

Keep on going Willy, show us what you’re made of. pic.twitter.com/zoBdPpScnT

Should have changed formation earlier but that’s hindsight. Willian is class

Willian can’t get a regular start at Chelsea! Shows how far behind we are really. He’s a class player. ???

Willian has been absolutely class tonight.

Willian and Pedro different class. Why don’t they play every week? #cfc