Liverpool ace Daniel Sturridge is reportedly gathering interest from Spanish giants Valencia, as well as Real Betis, with the player also reportedly considering the chance to secure a move in January.

This is according to the Daily Mail, who state that both the Spanish sides are interested in the England international, with the news outlet also stating that the player is open to considering the possibility of securing a move away from Merseyside.

The Mail are also reporting that boss Jurgen Klopp has said that the current physical condition the player is in is the best he’s seen him in since his arrival in England. 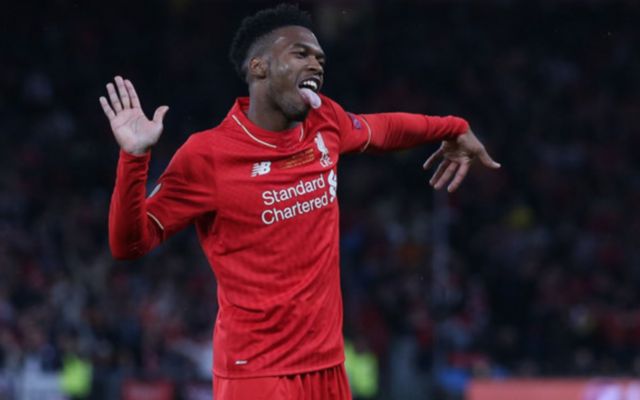 Liverpool forward Sturridge has attracted interest from both Betis and Valencia

Since arriving at Anfield from fellow Premier League side Chelsea in the summer of 2012, Sturridge has had a topsy-turvy time with the Reds.

In 133 games for the Reds, the England international has managed to amass a total of 64 goals and 24 assists, a decent record.

Sturridge’s instinctive finishing ability and lighting-quick pace has seen him labelled as one of the most efficient strikers in the whole of the Premier League.

One of the things that has put a dampener on the 28-year-old’s time with Liverpool is the forward’s injury record.

So far, the forward has missed a total of 88 games for the Merseyside club, something that has seen some Liverpool fans disregard’s the forward’s ability.

Should Sturridge end up securing a move abroad in the winter transfer window, it’ll be interesting to see how the forward manages to perform when playing in league completely different to the Premier League.