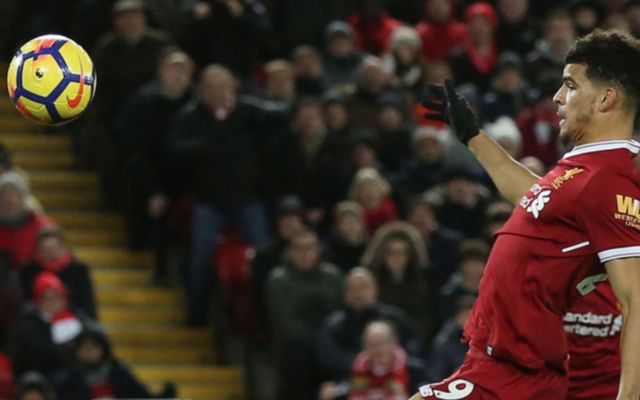 Liverpool were robbed of three points tonight, as a very harsh decision from referee Paul Tierney denied the Reds a late win against West Brom at Anfield tonight.

The key incident in the match occurred in the 82nd minute, a cross from Joe Gomez was turned home by Dominic Solanke, who thought he had given the home side a late lead.

However, referee Tierney ruled the goal out for handball, a decision that most thought was very harsh, as Klopp’s side looked to be robbed of all three points right at the depth.

The result now sees the Merseyside club now level on points with Spurs, with an inferior goal difference to the north London side meaning the Reds now sit in fifth place.

West Brom’s Ahmed Hegazi will take most the plaudits tonight, as the Egyptian international did everything he could to deny Liverpool taking all three points against the Baggies tonight.

Hegazi was solid throughout, with the player doing very well to stop his compatriot Mohamed Salah and co scoring tonight.

Referee Paul Tierney had an absolute shocker tonight, with the 36-year-old very harshly denying Liverpool a goal in the 82nd minute for a handball.

How Tierney deemed Solanke’s goal as a deliberate handball is beyond most, with the ball bouncing off the player’s chest before hitting his arm as it went past Foster in the West Brom goal.

Mané was poor, Can was poor but think the worst person on the pitch was Paul Tierney tbqh.

23 – Mohamed Salah has been directly involved in 23 goals for Liverpool in all competitions this season (in 24 games), two more than any other player in the Premier League. Super. pic.twitter.com/Mvk5TICb4q

Paul Tierney is the worst referee I’ve ever seen

Paul tierney that was the worst reffing performance I have seen from a prem graded ref appalling ????