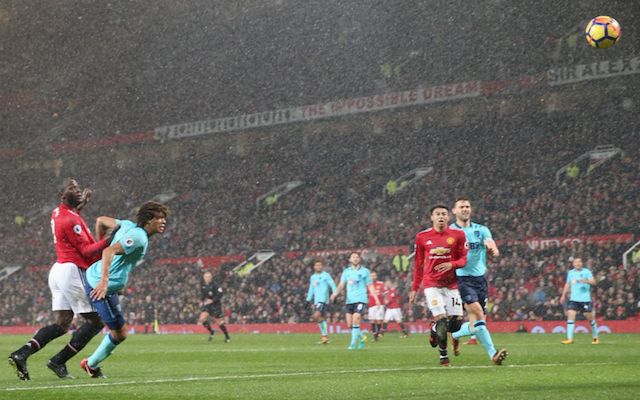 Manchester United took all the points at Old Trafford against Bournemouth thanks to a first-half Romelu Lukaku goal.

Lukaku scored the only goal of the game in the 25th minute after converting a header from a superb Juan Mata cross. The Belgian out-jumped both Nathaniel Ake and Charlie Daniels to register a rare Premier League goal in recent weeks.

The star has scored just three goals in his last 14 matches and his celebration perhaps reflected his poor form of late. The star refused to celebrate showing a muted reaction to his goal.

Luke Shaw earned a rare start in the league and impressed from left-back as the star looked confident and composed throughout. This could perhaps signal the start of more chances for the Englishman who will be pushing for a last chance to make it into Gareth Southgate’s England plans ahead of next year’s World Cup.

David De Gea was once again required to be at the top of his game. The Spaniard did well to keep a clean sheet and was the difference in tonight’s performance allowing United take all the points.

Bournemouth peppered the United goal with 14 shots but were unable to break the deadlock.

It took Dan Gosling less than half-an-hour to see a yellow card above his head and the Bournemouth man was largely outclassed throughout. Eddie Howe pulled the midfielder from the Old Trafford action with 20 minutes remaining deciding that Gosling would be better served on the bench rather than out on the field.

30 – Since the start of 2016-17, Romelu Lukaku has scored 30 goals in 38 Premier League appearances versus “non-big-six” sides. Bully. pic.twitter.com/lGNuCJykVx

Luke Shaw has been superb tonight. A joy to watch when fit and firing. Fantastic going down the left and makes up for Manchester United’s lack of wingers. Top performance.

If Luke Shaw can keep this form, there’s no doubt he’ll be first choice. His rampaging down the wing, with good defending is a joy to watch.

The main positive I can take from tonight’s win is Manchester United would’ve drawn or lost that game last season. Call Lukaku a flat track bully if you want, but his goal was the difference.