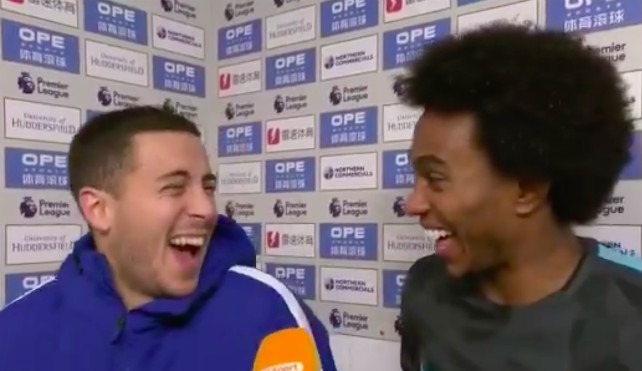 Chelsea pair Eden Hazard and Willian have made it pretty clear they’ve given up hope of the Blues catching Manchester City in the Premier League title race this season.

The two attackers were speaking to BT Sport after beating Huddersfield Town 3-1 last night, and were asked if they agreed with manager Antonio Conte that the gap was too big to close down.

Willian said 14 points was probably too much before being corrected by Hazard that the gap has been reduced to 11 points after their victory on Tuesday night.

This had both players in fits of laughter as Hazard joked that that kind of gap put them back in the race, before Willian regained his composure to give a more professional answer.

‘Eleven now, we won. We are back,’ Hazard responded, before the pair burst out laughing.

? Playing together
? Title race
? Man of the Match

Eden Hazard and Willian always have a laugh with @DesKellyBTS ?

These guys are too much! pic.twitter.com/JyXJGehPDY

Willian followed that up by saying: ‘We have to fight until the end. We are Chelsea. We are a big club.’

Chelsea supporters may realistically feel the same about the club’s slim title hopes, but they won’t exactly be pleased to see their players showing that kind of relaxed attitude to things.

The Premier League champions have not put up much of a title defence so far this season, and fans will remember all too well how the wheels came off the last time they were defending their crown.

Having won in 2014/15, Chelsea slumped all the way down to 10th in the league the following year as all focus at the club seemed to fall apart.

That doesn’t look like happening this time, but fans will want to see a little more ambition from their players to keep going as long as the title is still mathematically within reach.