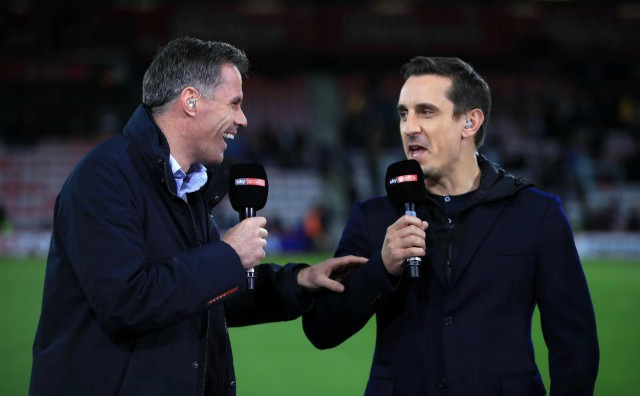 The duo, who have largely put aside their playing days rivalry to strike up a great punditry partnership in retirement, couldn’t resist a bit of Twitter banter last night after the latest Premier League results.

United got back to winning ways by beating Bournemouth, but Liverpool were held to a draw at home for the second match running as they struggled to break down the Baggies.

Neville seemed to joke that Liverpool should be happy with the clean sheet, allowing Carragher to respond with a comeback over Jose Mourinho’s recent behaviour.

Hopefully Klopp causes a fight in the tunnel to take the focus away about how far behind Man City we are. https://t.co/evmV06tUs1

‘Hopefully Klopp causes a fight in the tunnel to take the focus away about how far behind Man City we are,’ the former defender said, in reference to allegations about Mourinho’s behaviour after the Manchester Derby defeat on Sunday.

The Guardian claimed Mourinho inspired a post-match brawl in the City changing rooms over their overzealous celebrations following their 2-1 win at Old Trafford.

So far, no suggestion that Klopp did the same thing after the draw with West Brom.