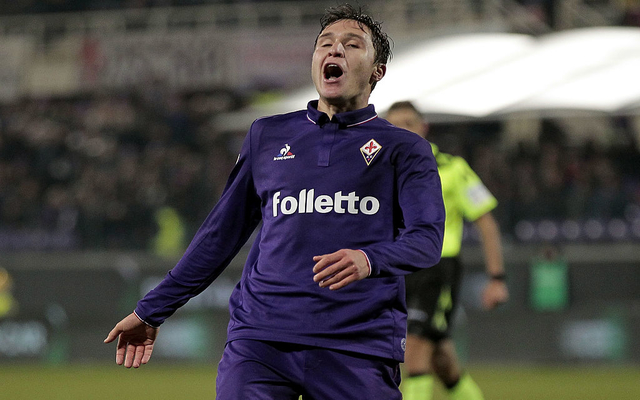 Liverpool and Tottenham have seemingly been keeping an eye on the progress of Federico Chiesa, with both clubs linked with a move for the Italian youngster.

The son of former Italy international Enrico, the 20-year-old has been in fine form so far this season as he has been handed a more prominent role by the Viola.

With four goals and three assists in 15 Serie A appearances, Chiesa is starting to make his mark in Florence, but it seems as though there is interest from England which could mean his influence is short-lived with the Italian outfit.

According to La Stampa, as reported by talkSPORT, both Liverpool and Tottenham want to sign him, but have been told that they’ll have to splash out £53m to land his signature.

It’s added that Fiorentina have no interest in lowering those demands, and so it does raise the question as to whether that valuation will be met.

While he’s certainly proven his quality this season and evidently has a bright and long future ahead of him, that’s a significant figure for a player who has yet to really prove himself at the highest level.

In turn, it would be no surprise if that puts off interested parties and forces Liverpool and Tottenham in particular to look elsewhere at other possible targets instead at the end of the season.

It’s questionable if Liverpool even need to strengthen in that department given the attacking stars that Jurgen Klopp already has at his disposal at Anfield, although Mauricio Pochettino could arguably do with additional quality and depth as Spurs continue to search for a way to compete on various fronts moving forward.

This past summer, as per The Daily Star, it was even suggested that Chelsea were pushing ahead with a move for Chiesa as Antonio Conte would undoubtedly be aware of his talents with his Serie A history, but that link has gone quiet which leads us to believe that either Liverpool or Tottenham have a decision to make.