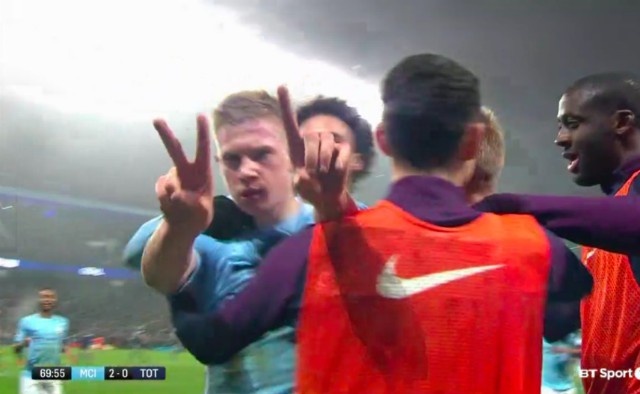 The Belgian powered through down the left to score a fine second goal against Spurs and make it 2-0, but he seemed to show the scoreline ‘2-1’ with his fingers as he celebrated.

This may have been a reference to City’s 2-1 win over Manchester United last week, which ended in a bad-tempered brawl in the Old Trafford away dressing room, according to the Guardian.

De Bruyne may feel he has a personal score to settle with Mourinho as well, having failed to break through at Chelsea under the Portuguese tactician earlier in his career.

Today’s celebration may be completely unrelated, but it’s hard to explain why he chose to show a 2-1 scoreline, unless he got the score wrong.

City and United are big rivals and seem the main contenders in this season’s title race, even if the Red Devils now surely look out of it after last week’s defeat.

It wouldn’t be at all surprising if De Bruyne felt he couldn’t resist the opportunity to rub it in.