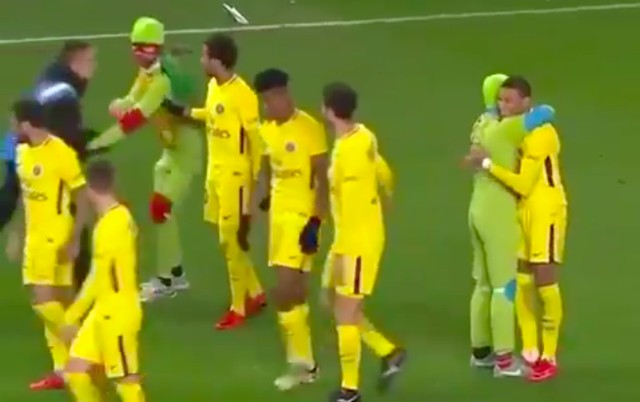 Paris Saint-Germain players got a surprise during their 4-1 win over Rennes today, with two fans taking to the field dressed as Teenage Mutant Ninja Turtles coming to greet them.

One even got a hug with PSG starlet Kylian Mbappe after Edinson Cavani scored a beautifully-taken third goal in their Ligue 1 victory.

Dani Alves joined in the fun by motioning that he was pulling a sword from his back, in the traditional Ninja Turtle style.

While this may seem totally nonsensical, Goal claim there is a method to the madness as the fans may be referencing a nickname given to Mbappe.

Great goal from Cavani, and a family reunion on the pitch for Kylian ‘Donatello’ Mbappe! ? pic.twitter.com/TL1zOK79w7

They claim the teenager is known as ‘Donatello’ due to a supposed resemblance to one of the Teenage Mutant Ninja Turtle characters.

Mbappe had a great game, scoring one and setting up two for team-mate Neymar as PSG stroll on towards the Ligue 1 title with similar ease to Manchester City in the Premier League.

Oh, and the Cavani goal really is excellent and well worth watching.