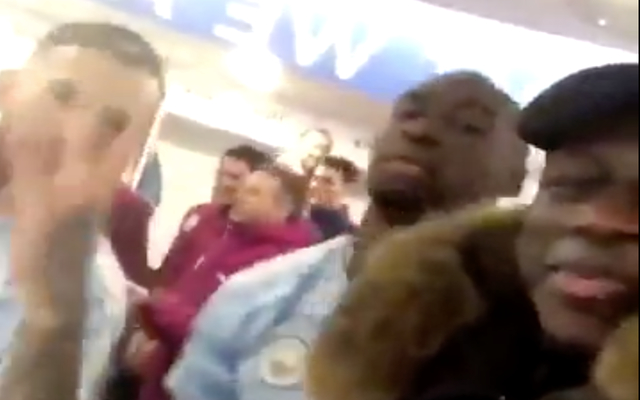 Man City are storming their way to the Premier League title, and they certainly look as though they enjoyed their comprehensive win over Tottenham on Saturday.

Pep Guardiola’s men secured a 4-1 victory over Spurs at the Etihad to extend their winning streak and unbeaten run, temporarily stretching their lead at the top of the Premier League table to 14 points ahead of Man Utd facing West Bromwich Albion on Sunday.

It looks as though it will take a real dramatic dip in form for City to surrender the title at this point, while some will criticise the lack of competitiveness in the Premier League this season given the ease with which the runaway leaders are winning.

Nevertheless, that doesn’t seem to be bothering the City players too much, especially based on the video below that was posted from their dressing room after the win over Tottenham.

Further, it looks as though they have no qualms about mocking their city rivals either, with the players heard singing ‘Park the bus, Man Utd’ in reference to criticism of Jose Mourinho’s negative and defensive tactics against them in the Manchester derby last week, as well as in other big games this season.

After the heated altercation last Sunday at Old Trafford, this is unlikely to impress the Portuguese tactician or his players, and while some may laugh and find it amusing, others will slam City for a lack of class and respect which is arguably not what Guardiola wants to see…