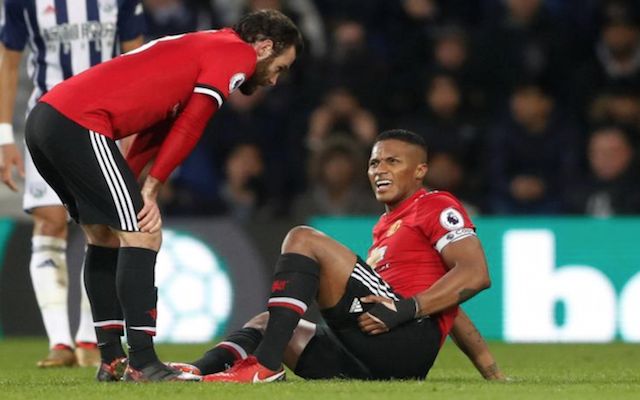 Man Utd defender Antonio Valencia caused a panic on Sunday as he had to be replaced in his side’s 2-1 win at West Bromwich Albion.

The 32-year-old has been an ever-present for United in the Premier League this season, playing every single minute up until this weekend.

In turn, any potential absence will be a blow to the Red Devils, as they’ve continued to impress defensively and boast the joint-best defensive record in the English top flight.

Jose Mourinho knows he’ll have Matteo Darmian capable of slotting in at right back while versatile veteran Ashley Young could also do a job, as he has done at left back at times this season. Further, the Portuguese tactician could even go to a back three which we’ve seen this year too.

Based on this reaction though, Mourinho doesn’t sound too concerned after the initial worry that arose after the game as he was seemingly pretty relaxed about Valencia getting the time needed to recover this week from his hamstring injury as he wasn’t set to face Bristol City in the League Cup anyway.

“No (I’m not worried about the injury), that’s football – especially football in England,” Mourinho told Sky Sports, as reported by The Express.

“Sometimes it happens. He knew he was not going to play the next game against Bristol [City] – he knew that.”

While that isn’t a direct suggestion that Valencia has escaped a serious injury at this stage, Mourinho has been forthcoming in the past when discussing injuries, as noted as recently as last week when he conceded that he feared Eric Bailly may need surgery, which he underwent shortly after.

As a result, he has seemingly allayed fears over Valencia for now, but further tests will have to be done to work out the extent of the problem.