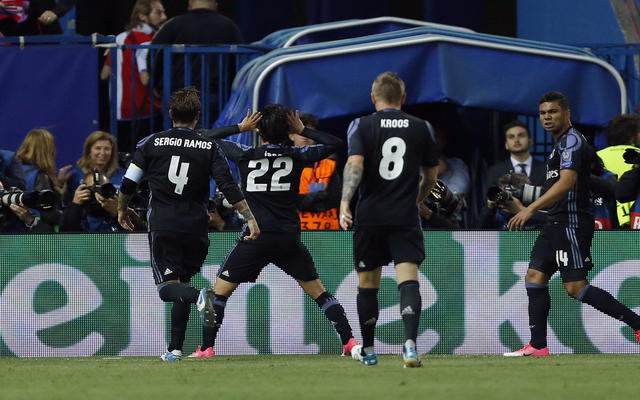 When it comes to players that Real Madrid really don’t want to lose, Isco would surely be included in that category such is his quality.

The 25-year-old has bagged five goals and provided five assists in 24 appearances in all competitions so far this season, as he has been given a more prominent role under Zinedine Zidane.

It hasn’t led to entirely positive results for the team as a whole as they’ve fallen short of the high standards expected at the Bernabeu so far this year both in La Liga and the Champions League, and so changes may well be needed in the long-term.

With Gareth Bale returning to full fitness and featuring at the FIFA Club World Cup this past week, that will lead to pressure on Isco keeping his place in the starting line-up, and speculation over his future has emerged again.

According to Don Balon, as re-reported by The Express, the Spanish international is being targeted by Paris Saint-Germain, Manchester City and Juventus in the event that he’s forced to look elsewhere for a key role and regular playing time.

With Alvaro Morata and James Rodriguez leaving this past summer, it would surely mean that there’s plenty of space for Isco to shine and be a pivotal figure for Madrid, but the fear of an exit still seems to be looming over him.

The first major question mark will obviously still be over Bale’s ability to stay fit, as he has shown over the last three seasons that he hasn’t been able to avoid injury setbacks.

If that trend continues, then not only does that surely clear a path for Isco to remain in the line-up, but it could even raise question marks over the Welshman’s future at the club as Los Blancos can’t afford to see him sit on the sidelines with the regularity he has done in recent times.

It’s a tricky situation for Madrid, but it’s no surprise that the report claims multiple clubs are ready and waiting to snap Isco up such is the class and quality that he possesses.