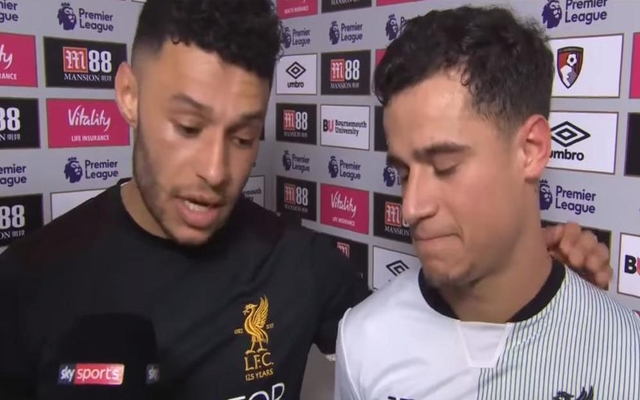 Liverpool ace Alex Oxlade-Chamberlain stepped in to support teammate Philippe Coutinho on Sunday, and supporters were absolutely loving it.

After putting in a great performance in the 4-0 win over Bournemouth as the Reds continued their impressive form in recent weeks, Oxlade-Chamberlain joined Coutinho for the post-match interview with Sky Sports.

Naturally, the Brazilian’s future at Anfield was a talking point and as he slightly struggled to give an answer on it, Oxlade-Chamberlain interjected and gave his opinion on the matter.

Further, he also subtly hit out at the question from the reporter, as he insisted that there were no doubts over Coutinho’s commitment to Liverpool both on and off the pitch, and he ultimately shut down the line of questioning which would have been much appreciated by his teammate.

“He’s been top quality since the start and every time he gets on the pitch he does his all for the club and that’s the most important thing,” he said, as seen in the video below.

“It is not fair to ask those sort of questions, I don’t think. He gives us his all every game and that is all we can ask for.”

If his display wasn’t enough, his heroics in the interview earned him even more praise from Liverpool fans, as seen in the tweets below, as he continued to delight them even after the full-time whistle.

Fair play to Oxlade-Chamberlain, it would have been easy to just let it slide and let Coutinho continue to struggle batting away the question but he stepped in and showed great support and leadership. Liverpool fans are delighted, and rightly so…

Alex Oxlade-Chamberlain helping Coutinho answer when they asked him again regarding him leaving.

Is right Oxlade-Chamberlain there. Played well on the pitch, helped his team-mate off it when faced with the shit-stirring questions.

Oxlade-Chamberlain interceding on Coutinho’s behalf after question to the Brazilian on his future ?? “Not fair to ask those questions—he’s been the most professional player”

That was absolute class from Oxlade-Chamberlain there, reporter putting Coutinho under pressure with a dumb question and Ox stepped in so professionally. That’s captain material right there, I’m so impressed

Alex Oxlade-Chamberlain continues his impressive display through to the post-match TV interview. He interjects as Phil Coutinho is asked about his future and supports his team-mate, highlighting the Brazilian’s professionalism and labelling the question unfair.

Yeah it was class, fair play to him. Played great too

Ox brilliant in post-match interview – hat’s off to him, Coutinho struggled to even say Liverpool is his team just he likes playing fball and gives his all when he plays! He’s on his way but not in Jan. Keep it up, good luck to him, great player will miss him!

that was brilliant, he’s gone way up in my estimation after that (game and especially the post match interview)