Arsenal host Liverpool in the Premier League in this week’s Friday night fixture, and we’ve put together a combined XI of the two teams ahead of their meeting at the Emirates Stadium.

It’s certainly Jurgen Klopp’s men who go into the game in better form, with the Reds dominating in attack in our line up below.

Here’s a look at who makes our side, who’d be in yours…?

GK: He might not be at his best any more, but Petr Cech gets in ahead of Liverpool’s Simon Mignolet, who has long not looked good enough to play for a club of this size.

CB: You won’t be seeing any Liverpool centre-backs in this side, with Laurent Koscielny taking the first of the two places.

CB: Alongside him is the inconsistent Shkodran Mustafi, who for all his issues has certainly impressed more for Arsenal than the likes of Dejan Lovren have for Liverpool.

RB: With Hector Bellerin off form at the moment, we’ve gone for Joe Gomez at right-back, with the youngster making a real name for himself after returning from a nightmare injury spell.

LB: One of the signings of the season, it’s comfortably Sead Kolasinac getting in at left-back, even if Alberto Moreno has shown some improvement this term.

DM: We’ve gone for a 4-1-4-1 formation to fit in a number of world class attacking players, but holding the fort in the defensive midfield role is Liverpool’s Emre Can.

AM: In the centre, one of the two spots is taken up by Brazilian playmaker Philippe Coutinho, who has been superb again this season.

AM: Alongside him is Mesut Ozil, who has put his contract issues to one side to show some fine recent form for Arsenal.

AM: Out wide on the right is Sadio Mane, who has surely out-performed the lacklustre Alexis Sanchez for much of this season so far.

AM: And on the left there can be no debating Mohamed Salah deserves his spot, with the Egyptian topping the Premier League scoring charts with 14 goals in a superb debut season.

CF: In a close call up front, Roberto Firmino edges Alexandre Lacazette despite not being an out-and-out centre-forward, with the Brazilian adapting and improving all the time for Klopp’s side. 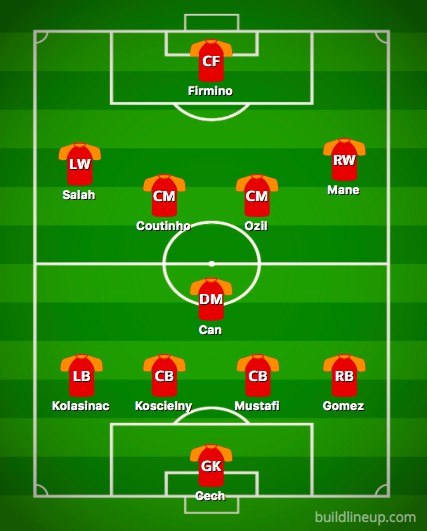