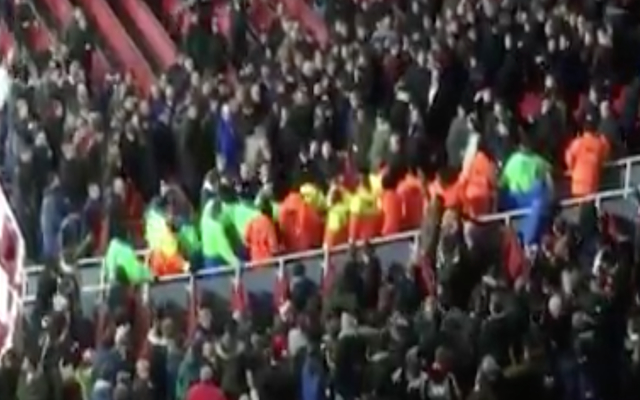 Fortunately, they didn’t look too serious but reports claim that Arsenal and West Ham United fans were involved in scuffles on Tuesday night.

They occurred after Arsenal had secured a 1-0 win over the Hammers in their League Cup meeting at the Emirates with the video below showing a tense stand-off between the two sets of supporters with stewards lined up between them.

Further footage taken after the game doesn’t appear to show any further violence breaking out, but it’s not quite the Christmas cheer that was hoped for by many you would assume.

As per The Sun, they claim that fights did break out and that objects were thrown between the fans, but no injuries or arrests have yet been reported.

Meanwhile, a goal from Danny Welbeck was the difference between the two sides, and it was in fact the only attempt on goal between both teams in a drab match.

Nevertheless, it’s Arsenal who advance to the semi-finals of the League Cup, while they’ll be happy there weren’t any really unsavoury scenes in the stadium after the game too…

Few scuffles at the end with some West Ham fans attempting to enter the Arsenal section. Stewards did well to prevent further unrest. #AFCWHU pic.twitter.com/n3Pl1X8q2p