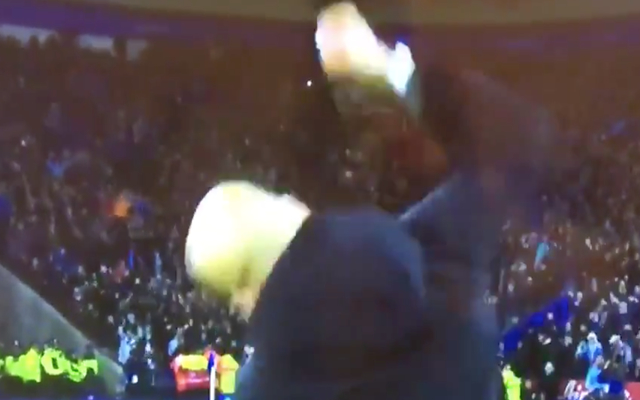 It’s fair to say that Pep Guardiola was a happy man on Tuesday night, as he saw his Man City side advance to the semi-finals of the League Cup.

City needed a penalty shoot-out to see off Leicester City at the King Power Stadium, with Claudio Bravo emerging as the hero as his side booked their spot in the last four.

Naturally, Guardiola will want to compete for as many trophies as possible this season, and while they certainly have bigger prizes on offer in the Premier League title and Champions League, they’re still on course for an historic quadruple as things stand.

Evidently, he was just delighted to get the win on Tuesday, as seen in his reaction after the game. Not only did he look like he’d just won the competition as he made his way over to the travelling supporters, but he even then decided to join in the celebrations.

Standing in front of a strong City contingent who sang their song for him, he went on to orchestrate affairs with some strong moves which delighted supporters on Twitter, as seen below.

Winning is ultimately everything to Guardiola, and he’ll hope that the second half of the season is as good as the first as they march on in pursuit of major honours this year.

Literally in love with our manager