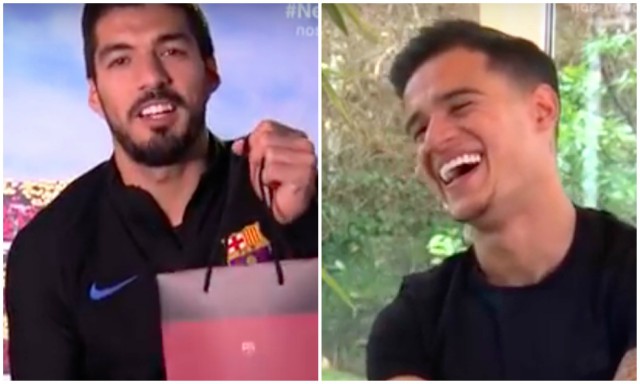 The Uruguay international knows Coutinho well from his time alongside him at Anfield, and seemed delighted to draw his old colleague in the present-sharing game supposedly organised by PSG forward Neymar, according to the Daily Mirror.

Sport claim Coutinho is on his way to Barcelona this January, and, somewhat awkwardly, Suarez ensured he sent Coutinho his present in a Barca-branded gift bag.

The Brazil international was rescued by team-mate Alex Oxlade-Chamberlain in a recent interview quizzing him about his future, but he was on his own here.

‘Well Philippe, from Barcelona I send you a gift that I know you’ll like a lot, because you like it a lot and I know you’re going to remember the good times that we have and that we live,’ Suarez says in the video.

‘What the f***?’ Coutinho responds as he pulls out the bottle.