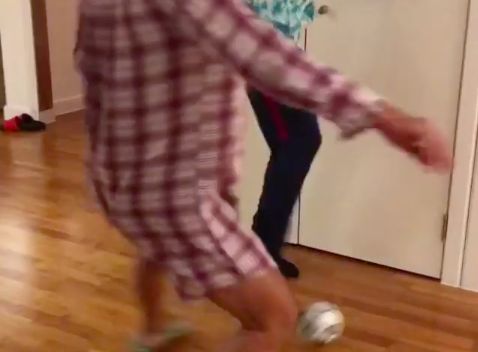 Manchester City striker Gabriel Jesus nutmegged his own mother in a brutal but hilarious video uploaded to his official Instagram page yesterday evening.

The Brazil international has been in sensational form in the Premier League this season, helping spear-head City’s seemingly unstoppable charge towards the title.

But if you thought Jesus would take his time away from the pitch to stop ruining opponents with his superb skills, you have another thing coming.

See below as the 20-year-old shows footballing ability doesn’t seem to run in the family as he nutmegs his poor mum several times while she fails to show any kind of skill on the ball.

City fans will hope Jesus takes it easy, though, as he looks like picking up an unfortunate injury if he keeps throwing himself about on the floor of his house like that!

City take on Bournemouth in the Premier League in their next game this weekend as Jesus and co. will hope to make it 17 league wins in a row.