It’s one of the biggest dates on the footballing calendar – El Clasico takes place this weekend as Real Madrid host Barcelona in La Liga’s stand-out fixture on Saturday afternoon.

Lionel Messi and Cristiano Ronaldo will be renewing their long-standing personal rivalry as well, and the pair are of course included in our star-studded combined XI here.

In truth, El Clasico best XI’s have seen better times, but giants of the game such as Xavi and Neymar have recently departed Barca, while a number of current stars like Andres Iniesta, Gareth Bale, Luka Modric and Toni Kroos no longer look at the peak of their powers.

There’s even some sign that Ronaldo and Luis Suarez are entering decline this season, though both still make our line up below…

GK: It’s an easy choice in goal, with Marc-Andre ter Stegen a truly world class shot-stopper and the kind of big name Real Madrid would love to have over Keylor Navas.

CB: A legend of this fixture, Sergio Ramos takes one of the two centre-back spots after continuing to be a hugely important part of this Madrid side and a great leader on the pitch.

CB: In ahead of Barcelona team-mate Gerard Pique, we’ve gone for the excellent Samuel Umtiti, who has to go down as one of his club’s finest recent signings, despite not being the biggest name beforehand.

RB: With Dani Alves no longer at the Nou Camp, there’s not a great deal to choose from at right-back, but we’ve just given it to Dani Carvajal, who is Mr Reliable for Real Madrid.

LB: And it’s another Los Blancos star on the left, with Marcelo an absolute world beater on his day and a great long-serving member of this squad.

DM: Back in the day we’d have had Xavi and Iniesta in this area, but times are changing and it’s now the more defensive-minded, though excellent, Sergio Busquets in the first spot.

DM: Alongside him is another top defensive player in the form of Real Madrid star Casemiro, who has risen from being a squad player to being undroppable for the Spanish giants.

AM: A player who’s improved tremendously in recent times, Isco takes the central attacking midfield spot, even though he’s often also shone on the left-hand side of attack.

RW: Surprise, surprise, there’s still a place for the delightful Lionel Messi on the right-hand side of attack. The Argentine remains unplayable on his day, with 18 goals and six assists in all competitions so far this season.

LW: On the left, it’s recent Ballon d’Or winner Cristiano Ronaldo, who hasn’t had the best of starts in La Liga this term but who has enjoyed another memorable 2017.

CF: No longer at his best, but still a deadly goal threat when he’s on form, Luis Suarez spear-heads our attack as Karim Benzema looks even more in decline this term. 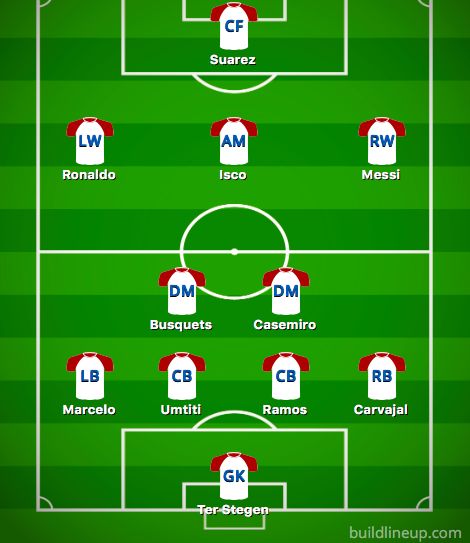