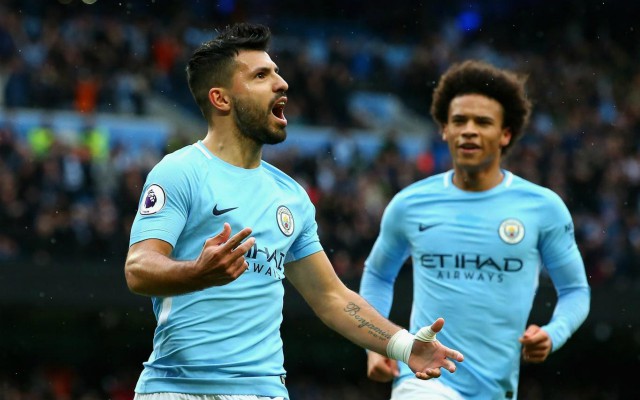 Manchester City striker Sergio Aguero scored his 100th goal at the Etihad Stadium this afternoon to give his side a 1-0 lead over Bournemouth.

Pep Guardiola’s men are chasing a 17th consecutive win in the Premier League, but Aguero also managed a personal landmark as City stroll towards the title in some style.

City have made the best-ever start to an English top flight season and Aguero is undoubtedly one of the jewels in the Sky Blues’ crown.

The Argentine front-man also became City’s all-time leading goalscorer this season, even if he hasn’t always been an automatic starter under Guardiola.

Guardiola recently left Aguero on the bench for the whole of the Manchester Derby, and there’s been some speculation that the 29-year-old could leave.

The Daily Mirror report that Aguero is unsettled at the club under Guardiola and could look to end his long association with the club next summer.

City may have a ready-made replacement in exciting Brazilian youngster Gabriel Jesus, but stats like today show why Aguero is so important to this side.