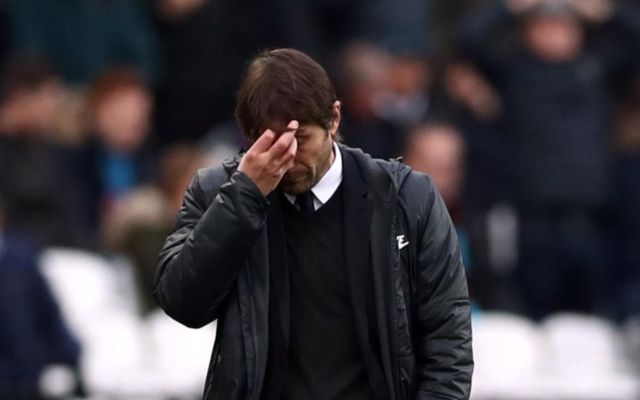 In terms of ending the season with trophies, it’s not looking good for Chelsea and Antonio Conte as the January transfer window fast approaches.

The reigning Premier League champions are third in the table after 19 games, 16 points adrift of leaders Man City, and so the cup competitions and Champions League are likely to now represent their best chance of winning silverware.

While that’s easier said than done, it remains to be seen whether or not the Italian tactician is given money to spend in the transfer window next month, with The Mirror reporting that there is a risk he could clash with the Chelsea hierarchy as he wants to spend on bringing in key players to address areas of weakness.

Amongst his priorities is a new striker, while Thomas Lemar, Ross Barkley and Leon Bailey are all specifically mentioned in the report as being possible targets.

It remains to be seen whether or not the Chelsea boss gets his wish and sees key individuals arrive midway through the season, as he has certainly struggled with a lack of quality of depth so far this season.

Conte has had to rely on certain players to feature heavily throughout the campaign thus far, namely the likes of Marcos Alonso and Alvaro Morata, given that he doesn’t have too many options beyond them.

In turn, it’s no surprise that the report links him with wanting to make January signings, but it will be up to the powers that be to determine if he gets a transfer kitty or not and it could be a source of real frustration if they ignore his demands.

On one hand, it could give Chelsea a boost in the second half of the campaign to land one trophy at least with the League Cup now within their reach, but perhaps it would make more sense to wait until the summer and spend big on top targets to go for the big prizes next season instead.