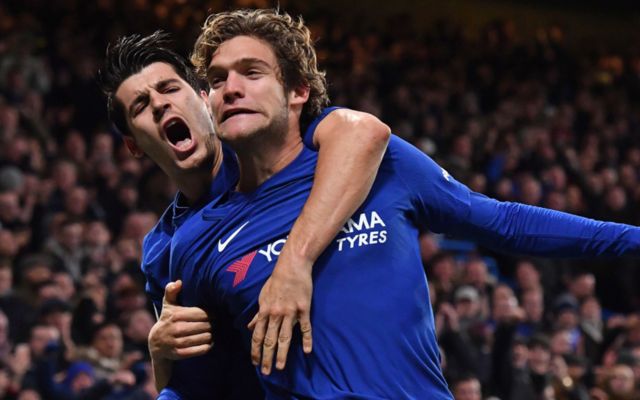 Chelsea had Morata and Alonso to thank this evening, as the Spanish pair scored one goal each to see their side beat Brighton 2-0 at Stamford Bridge.

The home side opened the scoring just seconds after the start of the second half, as a cross from Cesar Azpilicueta allowed Morata to head home to put the Blues 1-0 to the good. It the sixth time this season that Azpilicueta had assisted the former Real Madrid man.

Antonio Conte’s then doubled their lead in the 60th minute, as a cross from Cesc Fabregas saw Alonso head home to put Chelsea firmly in the driving seat.

The win means that the west London side are now just one point behind second place Man United in the Premier League table.

Summer signing Alvaro Morata was top class today, with the Spanish international’s early second half header setting the Blues on their way to a somewhat comfortable victory.

Morata was brilliant in leading the line for the home side today, with the striker linking up well with Eden Hazard as his side swept the Seagulls aside.

Another world class performance from Morata. Only better centre forward in the country is Kane.

6 – Cesar Azpilicueta has assisted Alvaro Morata for six Premier League goals this season – the joint-most for one @ChelseaFC player to another in a single season (Fabregas-Costa 14-15 and Lampard-Drogba 09-10). Amigos.

A certain Spaniard took most of the plaudits following the Blues’ victory tonight, but it wasn’t Morata!

Hope we all agree that Azpilicueta is the best defender in the EPL and the most consistent footballer in the league since he arrived. Stay blessed.

Azpilicueta has to be the best defender in the league he’s class and even has a creative side, a privilege to have at my club.

Azpilicueta what did we ever do to deserve this man.

His work rate , mentality and attitude is what you expect to see in every single footballer . Always goes the extra distance.

Azpilicueta the perfect example of giving a player a chance and not writing him off because you hadn't heard of him when he signed.

Azpilicueta and his crossing ability. Unreal. The guy is world class.