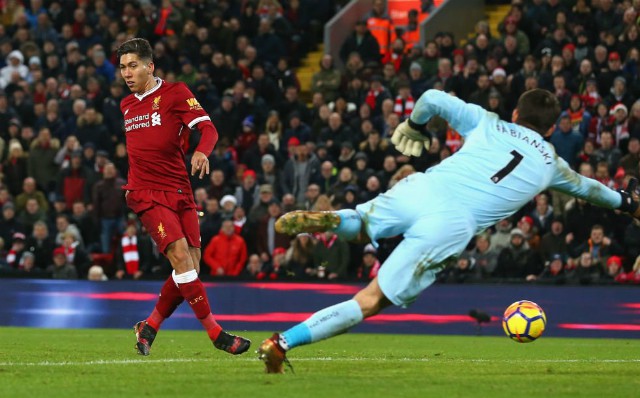 Liverpool made easy work of Swansea City this afternoon as they put five past the relegation strugglers in a one-sided contest at Anfield.

Goals from Philippe Coutinho, Roberto Firmino, Trent Alexander-Arnold and Alex Oxlade-Chamberlain did the trick for the Reds as they continued their scintillating attacking form this season.

With a goal and an assist today, it has to be the Brazilian magician Philippe Coutinho.

Firmino was also outstanding with two goals, but it is the Reds playmaker who makes this team tick when they turn on the style like this.

Liverpool absolutely cannot afford to lose Coutinho to Barcelona or any other top club any time soon – replacing him looks a potentially impossible, and certainly very expensive, task.

Take your pick from pretty much anyone in this Swansea team, as they almost all look like they’ve given up on staying in the Premier League.

Of the lot today, however, Martin Olsson probably had the toughest time at left-back, coming up against Mohamed Salah on Liverpool’s right.

The Egyptian, remarkably, did not score today, but he still picked up an assist and was a constant threat down that side.

63 – Roberto Firmino has been directly involved in more goals in all comps for Liverpool under Jurgen Klopp than any other player (38 goals, 25 assists). Thriving. pic.twitter.com/fcuu5MixNr

Liverpool fans are pretty happy, and aside from Manchester City fans this season you’d have to say they’re probably treated to the best football in this league.

Firmino with another no-look finish ?

Firmino might be banned for that disrespect he showed with that No Look finish. #IDOL

As if Firmino’s done another no look finish. ? the disrespect loool