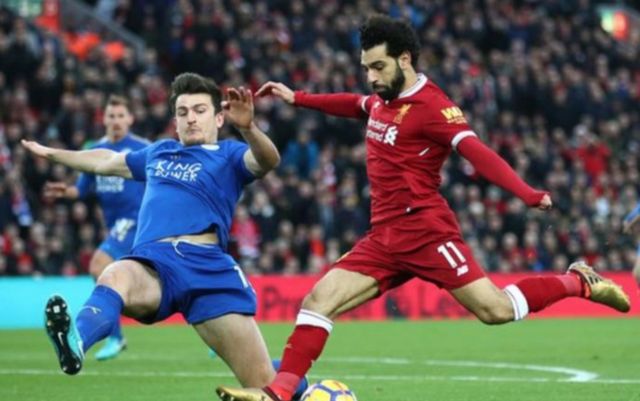 Liverpool had Mohamed Salah to thank this afternoon, as the player’s 16th and 17th league goals of the season saw the Reds come from behind to beat Leicester 2-1 at Anfield.

The Foxes opened the scoring early on, as a ball from Riyad Mahrez allowed Vardy to tap home to put Claude Puel’s side a goal to the good in the third minute.

Salah equalised for the home side in the 52nd minute, after a pass from Sadio Mane allowed the Egyptian to go through on goal, with the forward applying the finish to bring his side level.

The former Roma ace then put Jurgen Klopp’s side in front in the 76th minute, after the winger beat Harry Maguire before slotting home past Kasper Schmeichel to the delight of the Anfield faithful.

There’s only one candidate for this award…

Liverpool’s talisman Salah was on absolute fire this afternoon, with the 25-year-old’s brace being enough to see the Reds keep up the pressure on their rivals in the race for Champions League qualification.

Salah’s first goal was well taken, but his second was a stroke of genius, with the winger’s exquisite turn and finish sending the home fans into raptures.

Both goals from Salah there were absolutely wonderful. What a player

21 – Mohamed Salah has been directly involved in 21 goals in 21 Premier League appearances for Liverpool this season (16 goals, 5 assists). Ridiculous.

Salah. What a player. You just need to know how to use him.

I’m calling my first child Mohammed Salah, I don’t care if it’s a boy or girl

I don’t care what team you support or how biased you’re as a fan, you simply can’t deny how good Salah has been this season. Given the chance, he bags!

Salah is the greatest soccer player in the world