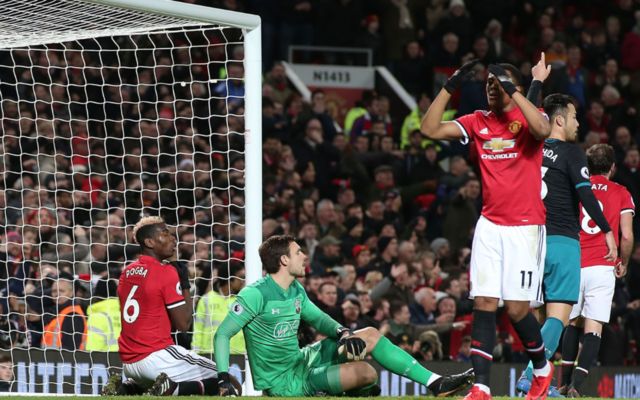 Man United drew 0-0 with Southampton at Old Trafford this evening as the Red Devils dropped more points in the title race.

United suffered big blow in the 9th minute of the match, as key forward Romelu Lukaku was stretchered off after he suffered a head injury after going for a header with Saints defender Wesley Hoedt.

The home side thought they found a breakthrough in the 81st minute, after Paul Pogba stabbed the ball home, however the midfielder was found to be offside as United continued to search for an opener.

Following the result, Jose Mourinho’s side are now 14 points behind league leaders Man City having played a game more.

Man United ace Ashley Young was the most impressive player out on the Old Trafford pitch this evening, with the England international proving to be a constant threat down the Red Devils’ right-hand side.

The player’s pace and crossing ability were on full show today, as the former Aston Villa star tried his best to help his side find a breakthrough against the Saints.

Man United are currently embarrassing. Haven't won in 4 in all competitions. After tonight's performance, the fans had every right to boo them off. Also, I don't get why Lindelof started, I don't rate him, he has been poor #AnnoyedUnitedFan #MUNSOU #Rantover #SkySportsFootball

Just watched Man United v Southampton:
United are poor, hugely overrated at this stage of the season… how they’re above Liverpool & Spurs in the table I don’t know! Good organisation from saints today. McQueen my MOTM.

How Man United are in the top four I don’t know, so many teams are better than them. Poor old boring Maureen, cue the inevitable ‘bad refereeing decisions’ rant as per ?

That was so poor from Man United. Can't be sluggish in December. Games come thick and fast and positions change quickly. Next stop is Goodison Park. Deary me